We had a lovely few days away. On the drive to Rotorua we stopped at Waihi and rode the old railway up to Waikino in an open carriage. Later we stopped at Mount Manganui and walked to the top --- always a great view.

We stayed by the lake at Waiteti, just out of town, at Waiteti Lakefront Motel. I think that was a pretty good decision; very peaceful, great view, relatively cheap, and free use of kayaks which we took advantage of on Saturday morning, paddling up the Waiteti Stream a bit.

On Friday morning we did the gondola and luge ... especially the luge, which everyone enjoyed. After that we visited Kuirau Park, which I always enjoy a lot --- it's so great to have a geothermal park right in the city. Then we went to Waimangu Valley, which I still think is the best geothermal attraction in the area because of its unique size and features, and its brilliant bush and lake setting. It's changed noticeably since I was last there; Warbrick Terrace is growing quite rapidly.

After kayaking on Saturday we went to the Redwoods for a short walk. I hadn't been there before and it's really great --- not as picturesque as some other places near Rotorua, but large and lovely, especially I imagine for running and biking. Then we went to Lake Okareka and did the new walkway there. Brilliant.

On the way back to Auckland yesterday we stopped near Putaruru and did the Te Waihou walkway. The Waihou river is stunningly clear and beautiful due to having flowed underground through filtering rock in the Kaimai Ranges (for fifty years, supposedly). We saw a lot of trout, but a couple of guys fishing complained they hadn't caught any because the clarity of the water made it too hard to estimate depth!

All in all, another wonderful central North Island getaway. I love this place. 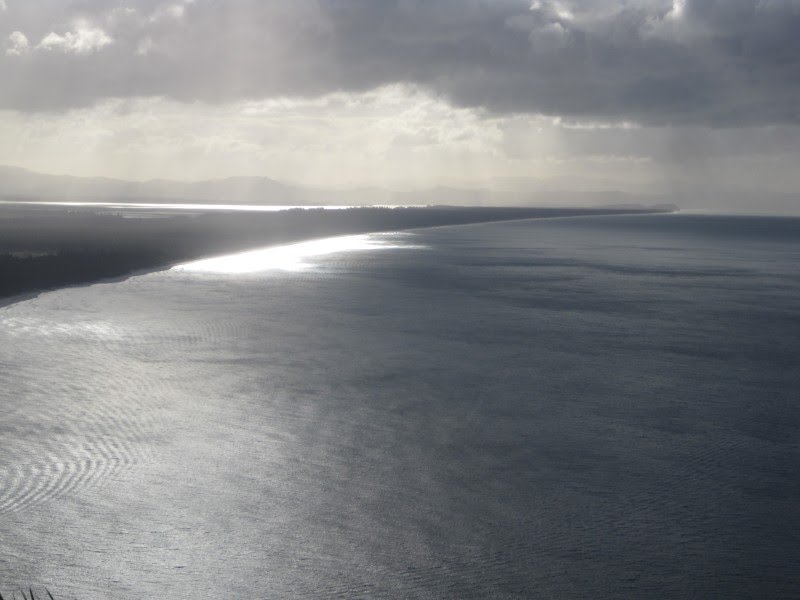 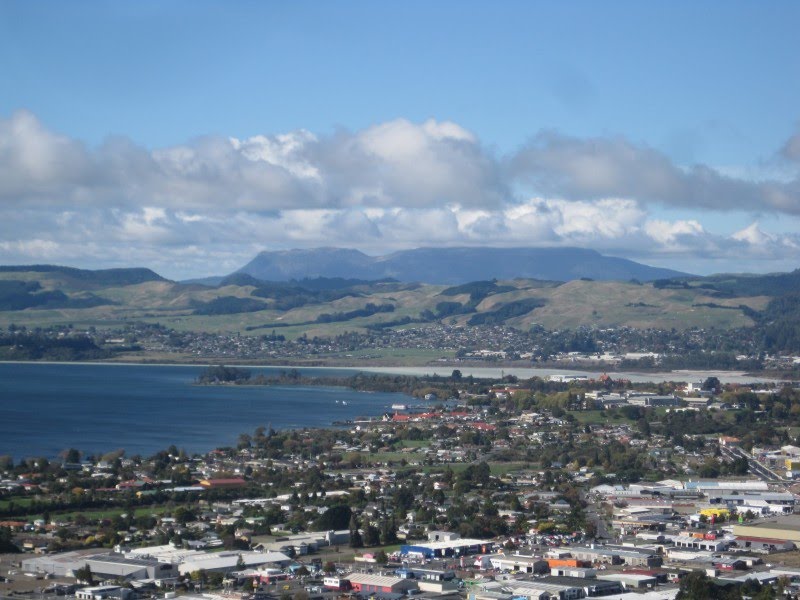 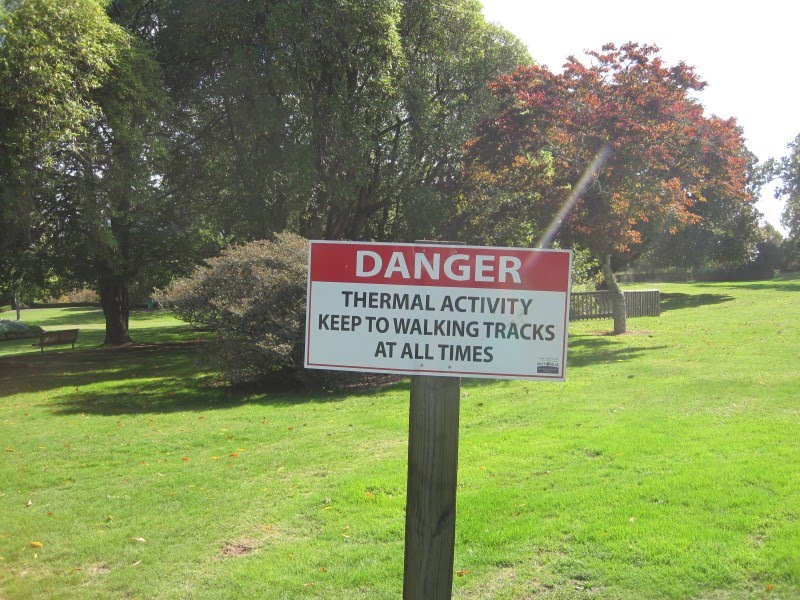 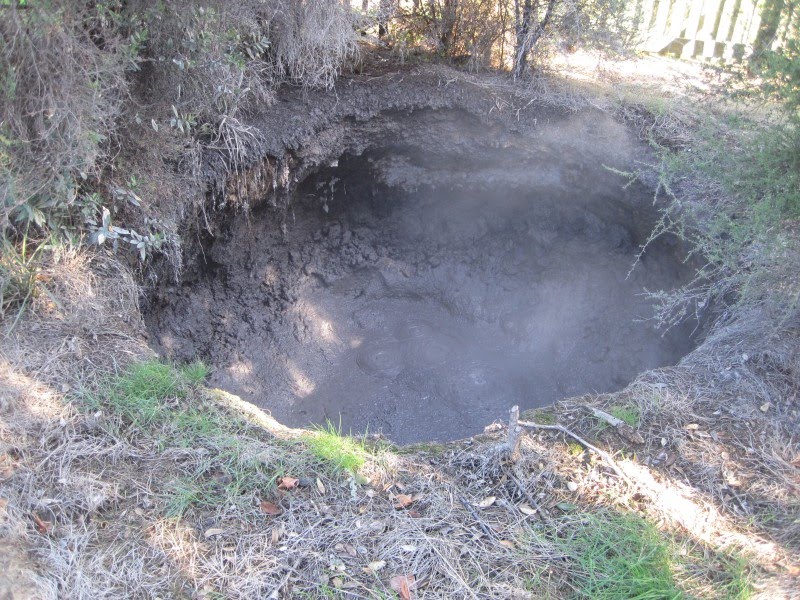 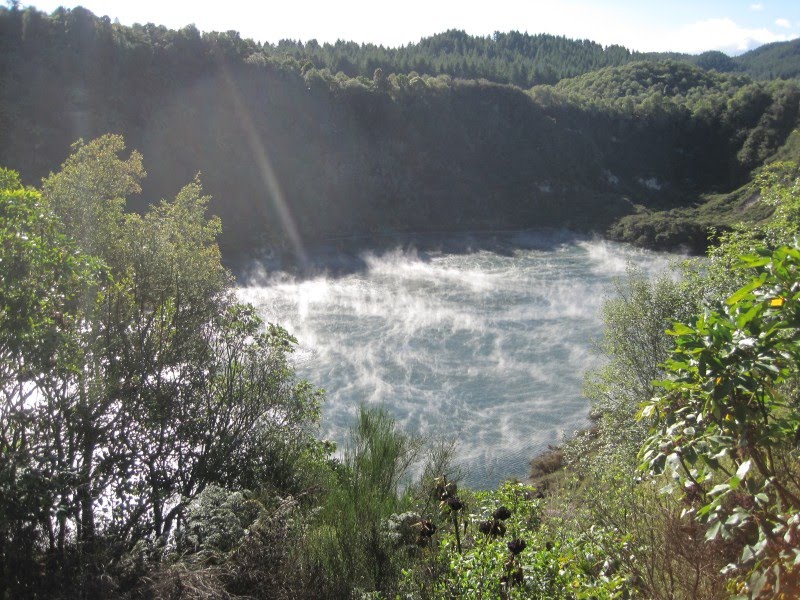 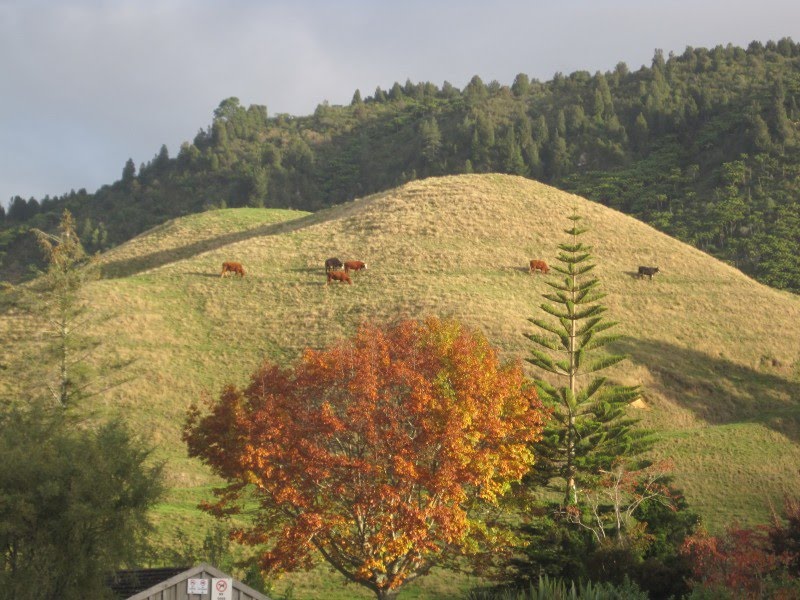 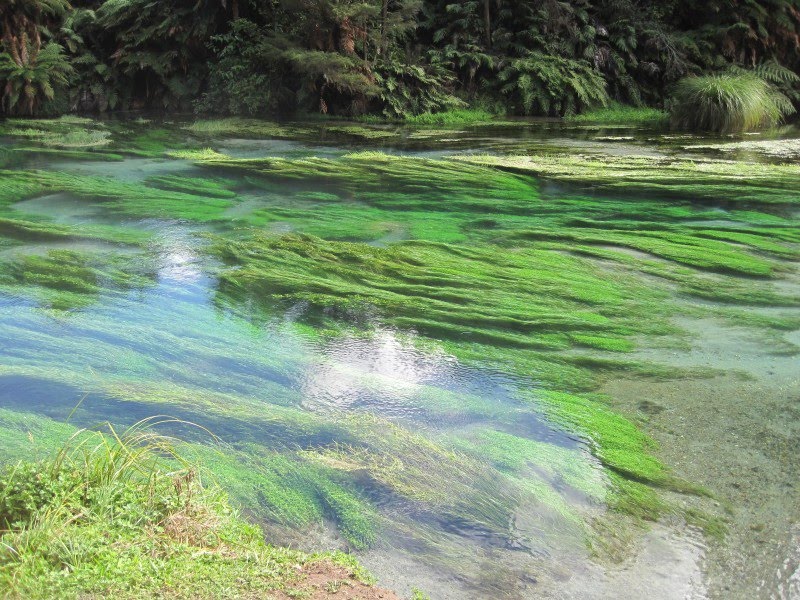 We drove out to the Upper Mangatawhiri Dam on Sunday afternoon and took a couple of hours to get to Piggotts campsite. It's a pretty small patch of flat grass, so I don't know how you'd get 20 people camping there, but whatever. There's also a small hut which I haven't seen mentioned anywhere. In fact we passed by it, thinking that couldn't be the place, but quickly turned back when it became clear that it was, in fact, the place.

A thunderstorm passed over during the night. It was the first time any of us have been in a tent during a thunderstorm, so that was exciting for everyone.

The next day we got up early and hit the trail about 8:15am. Based on the warnings about central Hunua tracks being "for experienced trampers only", and that we hadn't ever hiked a long distance carrying all our gear, I wanted to give us the maximum possible time to get to Adams campsite. As it turned out even the warning-est track (Upper Mangatawhiri) was just fine. Less fine was that the Adams campsite was a lot further along the track than where my map shows it, and when we finally found it at about 3pm, it looked pretty awful. The ground was waterlogged and, while there was a sign saying "toilet", there wasn't one to be seen. We decided to skip it and push on to our final destination --- Waharau Regional Park. (Now that I've looked a bit closer online, it seems Thousand Acres campsite is a better bet ... but it's not even on my map. Lesson: use up-to-date maps and do more research!)

So our three-day tramp turned into a two-day tramp and we arrived at Waharau about 5:15pm after nine hours of tramping, covering about 18km of reasonably rugged terrain with all our gear. Everyone was tired but I'm proud of my kids for handling it very well. 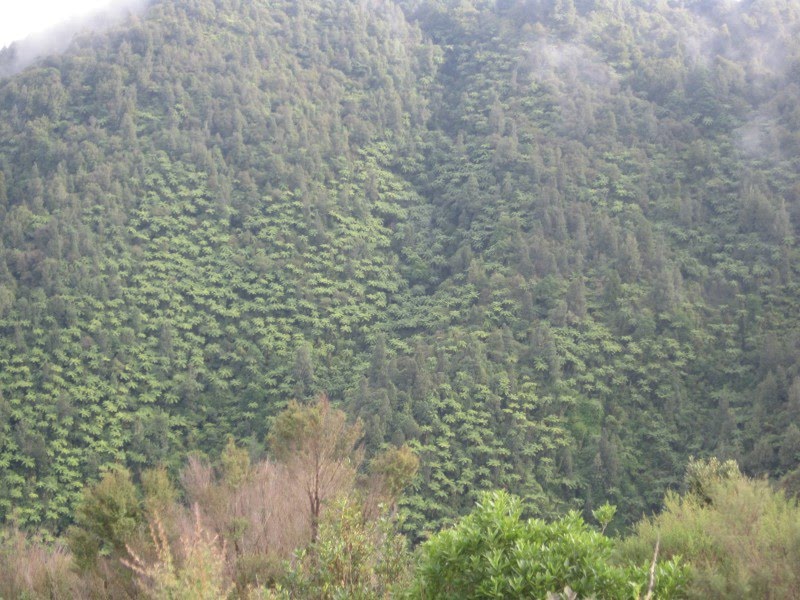 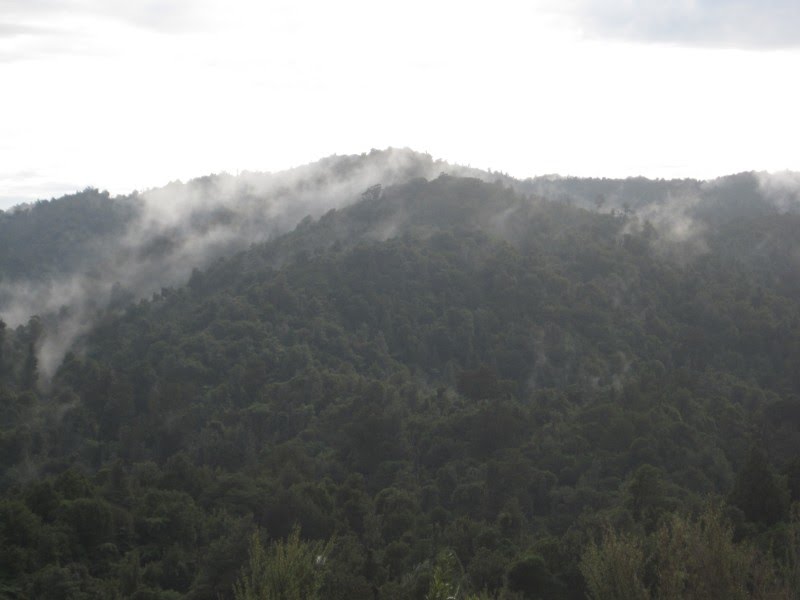 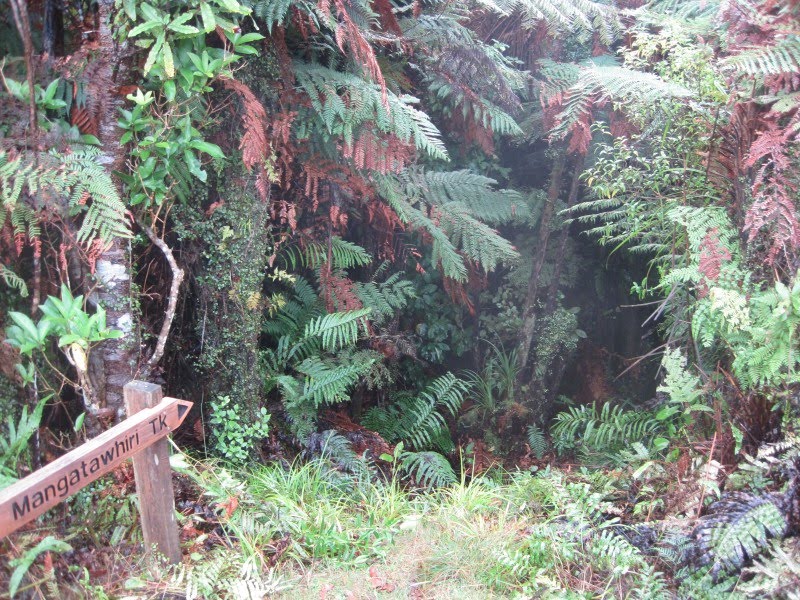 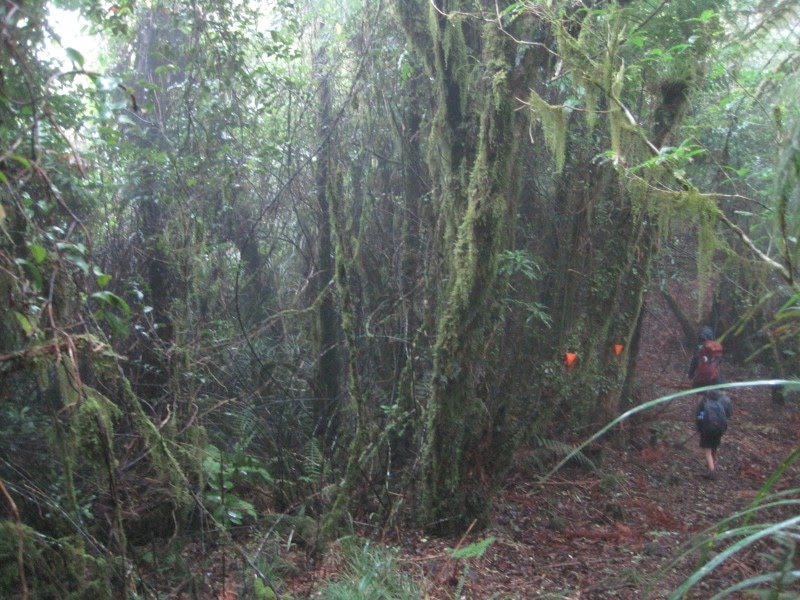 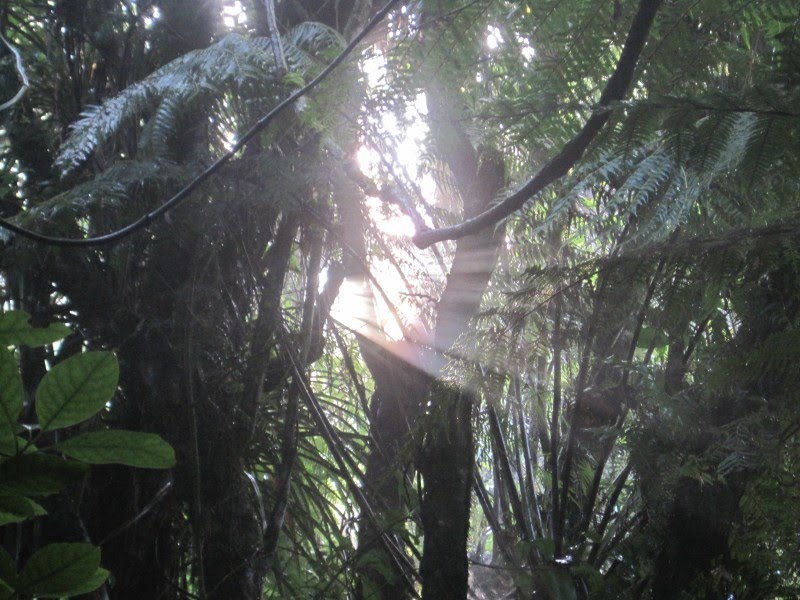 If the weather forecast isn't too horrible I'll be away the coming Sunday afternoon to Tuesday morning tramping in the Hunua hills southeast of Auckland.

Thursday is Anzac Day, a public holiday, and I'll be taking Friday off to go on a holiday with my family. So I'll probably be in the office/online only on Wednesday next week (that's Tuesday for those of you on the wrong side of the date line).

About a week later, Sunday May 5, I have a flight to San Francisco. I'll be in the Bay Area on Monday and Tuesday, and at LEAD training on Wednesday and Thursday.

About week after that, Friday May 17, I'm flying to Taiwan for a Mozilla layout/graphics/media work week.

The head of "Google NZ", Tony Keusgen, has been talking about New Zealand's shortage of "IT experts". And apparently, unlike most people who complain about it, he's actually tried to do something to help. That's great.

However, what's not so great, and of course not mentioned at all in the article, is that Google itself is contributing to the problem in a significant way by aggressively recruiting for NZ developers to move to their Sydney engineering office --- since they don't have an engineering office in New Zealand. That works for Google, for their recruits, and even for me and Mozilla, since there's basically no competition to Mozilla for NZ developers who want to do the sort of platform engineering work we do. It sucks for New Zealand though.

It's too bad the writer, Ben Chapman-Smith, didn't know about or declined to mention this. And if no-one called Tony Keusgen on it, that's bad too.

I would love to see a real Google office here. Some pretty high-profile Googlers are NZers. Make it happen!

I just sent a message to public-audio replying to Chris Rogers, Chris Pike and Chris Lowis. Fortunately Chris Wilson wasn't involved in the thread, although he could join at any moment.

It reminded me of a Mozilla meeting discussing multi-process video playback, which I attended with Chris Double, Chris Pearce, Chris Jones and Chris Blizzard.

Something is deeply wrong here.

The Future Of Cheating

I went to an orienteering event on Saturday. Orienteering is a race through a set of waypoints on a map; what sets it apart from a regular running race is the need to navigate via the map. Obviously it would be easy to cheat with a smartphone. Currently it's not hard to ensure people don't carry or use smartphones during the race. However, it's going to get increasingly difficult to detect cheating as technology progresses into smartphone watches, Google Glasses, and ultimately body implants. It doesn't seem practical to use X-rays or MRI scans on every participant, even if that would work.

Similar cheating problems are already happening in chess, and in written exams. Casinos grapple with these issues too.

It seems likely that any competitive event where real-time computer assistance (including communication with other humans) would be useful will sooner or later become practically impossible to secure against cheating. This will have profound effects. Even when people choose not to cheat, not knowing whether the game is fair is corrosive. Enjoy competitive games while you can.

This is going to be a problem for job interviews too.

I blogged last time the browser engine count changed, so I think to be fair I should blog about this one too.

I think this is good news for the Web. When we lost an engine, that was bad for engine diversity and the open Web. Now we're gaining one, and that's good for engine diversity and the open Web. It's not a direct reverse of the Opera situation though. Compared to Presto, Blink will have much more market share, and therefore a bigger impact. On the other hand, Blink is a promise to deliver a different engine over time, not a new engine right now, and even in the long term one presumes it will share a lot of code with Webkit --- especially if people port code between the two projects. So it contributes less diversity than Presto did.

One immediate benefit for the open Web is that today it's difficult for mobile Web developers to advocate "just coding to Webkit" as the way forward.

I am a bit worried about how this will impact Apple's support for the open Web. Safari has lagged behind other browsers in various ways, but they were also dragged along by Google to some extent in supporting new features whether they cared or not. Now they're falling completely off that train and we'll see a true test of whether Apple is willing to step up their investment to keep up with the progress of the open Web. Apple has obvious incentives to hobble Web apps on iOS, so I worry.

Of lesser importance, this is probably good for Mozilla. Even if it means Chrome moves faster, the fracturing of the Webkit community benefits us. It's not something to gloat over though.