This weekend, in between the media and layout work weeks, I had time off so I thought I'd get out of Taipei and see a different part of Taiwan. On Alfredo's recommendation I decided to visit Taroko National Park and do some hiking. I stayed at Taroko Lodge and had a great time --- Rihang Su was an excellent host, very friendly and helpful.

On Saturday I took the train from Songshan station in Taipei to Xincheng. From there I went via the lodge to the park's eastern headquarters and did a short afternoon hike up to near Dali village and back down again. This was short in distance --- about 3.5 km each way in two and half hours --- but reasonably hard work since it's about a 900m vertical climb.

On Saturday night Rihang took the lodge guests to Hualien city for dinner at a hotpot buffet place. The food was reasonable and it was a fun dinner. There were instructions in English and in general I was surprised by how much English signage there was in Hualien (including at the supermarket) --- I had expected none.

On Sunday (today) I got up fairly early for the main goal of my trip: Zhuilu Old Trail. Rihang dropped me off at the western end around 8:15am and I walked the 10km length in a bit under four hours. You're supposed to allow for six, but that's probably a bit conservative, plus I'm fairly fast. It is hard work and tricky in places, however. This trail is quite amazing. There's one stretch in particular where the path winds along the cliff face, mostly about a meter wide, and there's nothing between you and a sheer drop of hundreds of meters --- except a plastic-clad steel cable on the cliff side of the track to hold onto. It reminded me of the National Pass track in Australia's Blue Mountains, but more intense. Much of the track has spectacular views of the Taroko Gorge --- sheer cliffs, marble boulders, lush forest, and mountain streams. In one place I was lucky enough to see macaque monkeys, which was thrilling since I've never seen monkeys in the wild before. The trail has an interesting history; it was originally constructed by the Japanese military in the early 20th century (probably using slave labour, though it wasn't clear from the signage), to improve their control over the native people of the area. Later the Japanese turned it into a tourist destination and that's what it is today. Along the trail there are rest areas where fortified "police stations" used to be.

After finishing that trail, since I was ahead of schedule I continued with the Swallow Grotto walk along the road westward up the gorge. This walk was also amazing but offers quite different views since you're near the bottom of the gorge --- and it's much easier. The walk ends at the bottom of the Zhuilu cliff, which is neck-craningly massive. After that I got picked up and went to the train station to head straight back to Taipei.

This was definitely a very good way to see a bit of Taiwan that's not Taipei. Shuttling around between the train station, the lodge, and hiking destinations, I got a glimpse of what life is like in the region --- gardens, farming, stray dogs, decrepit buildings, industry, narrow roads, etc. But the natural beauty of Taroko gorge was definitely the highlight of the trip. I enjoy hiking with friends and family very much, but it's nice to hike alone for a change; I can go at my own pace, not worry about anyone else, and be a bit more relaxed. All in all it was a great weekend getaway. 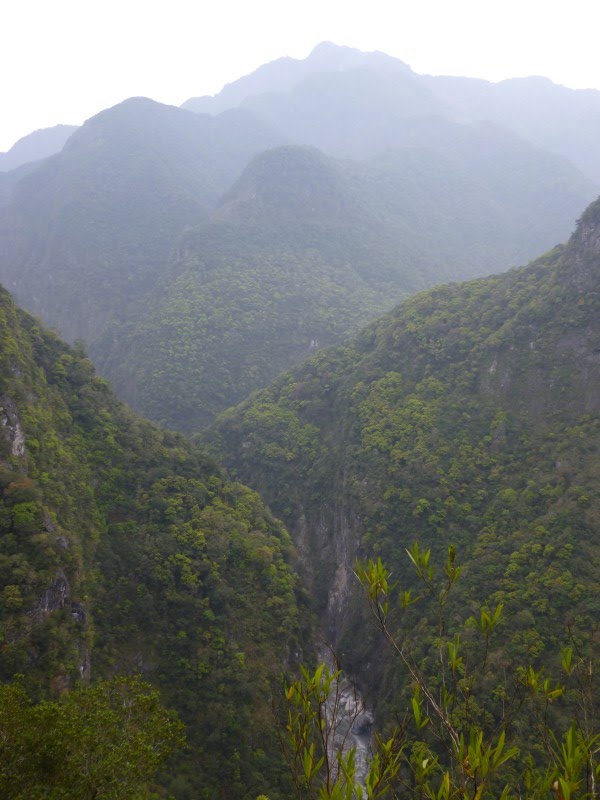 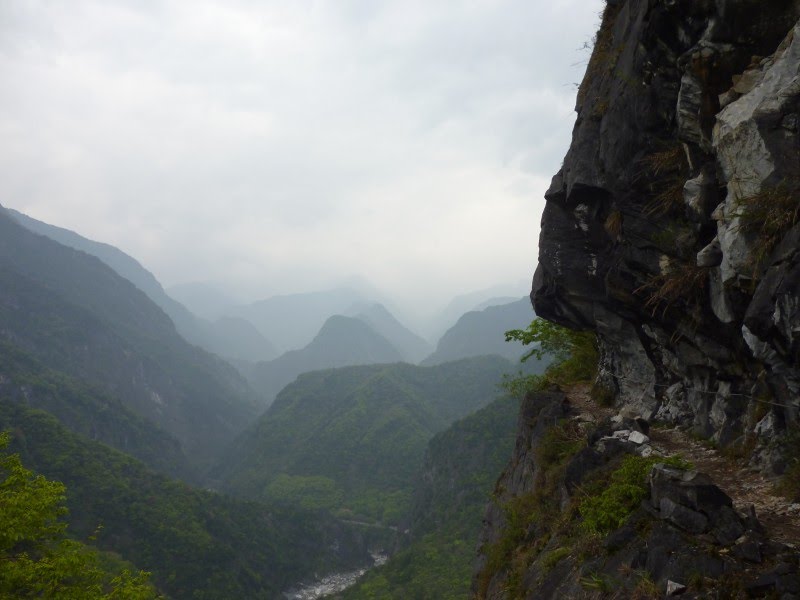 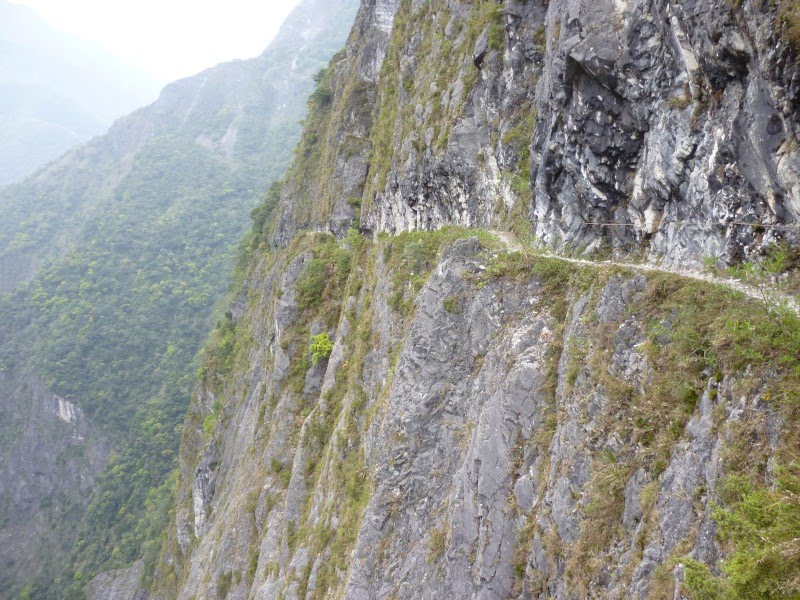 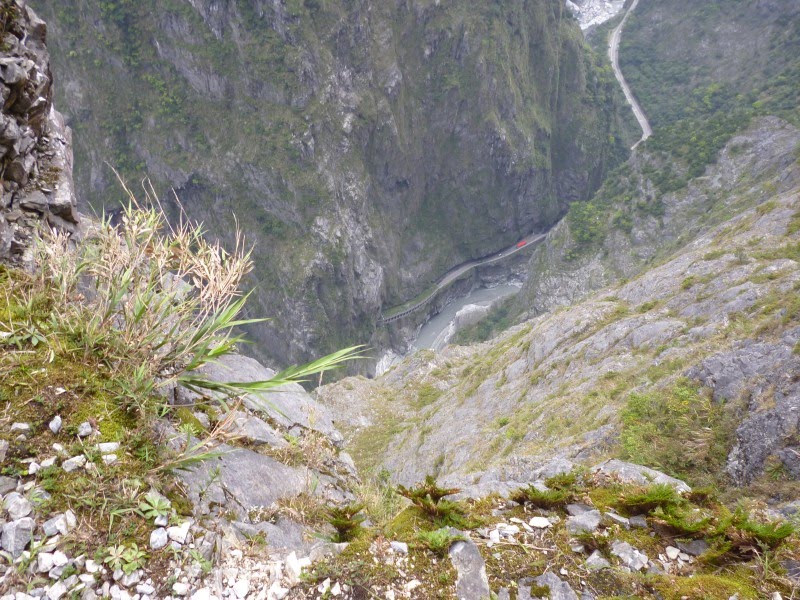 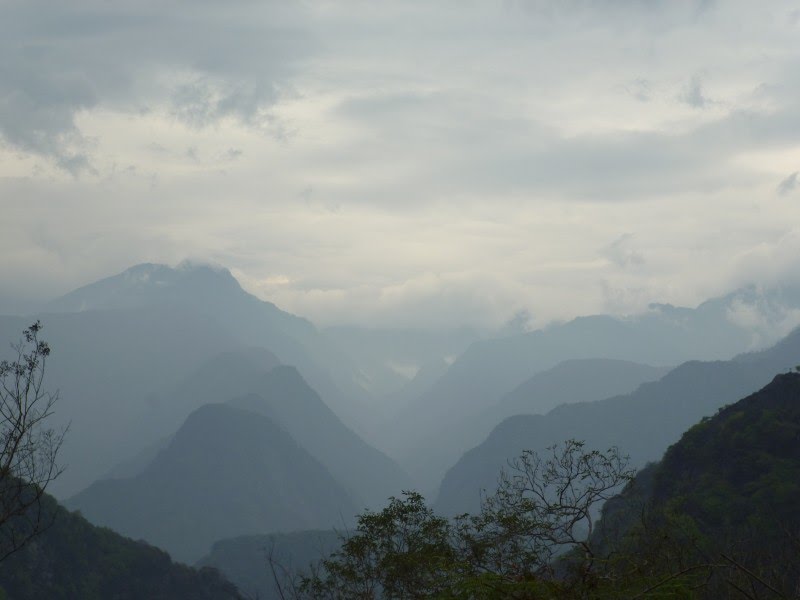 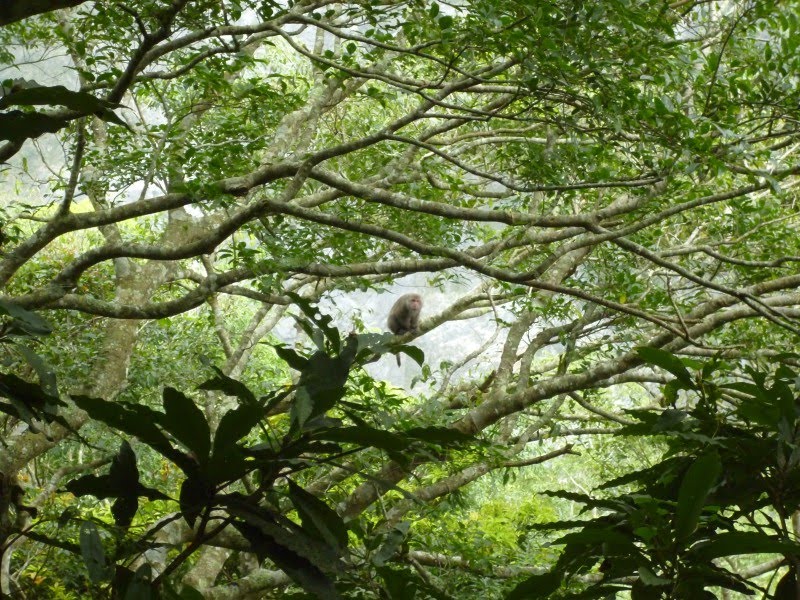 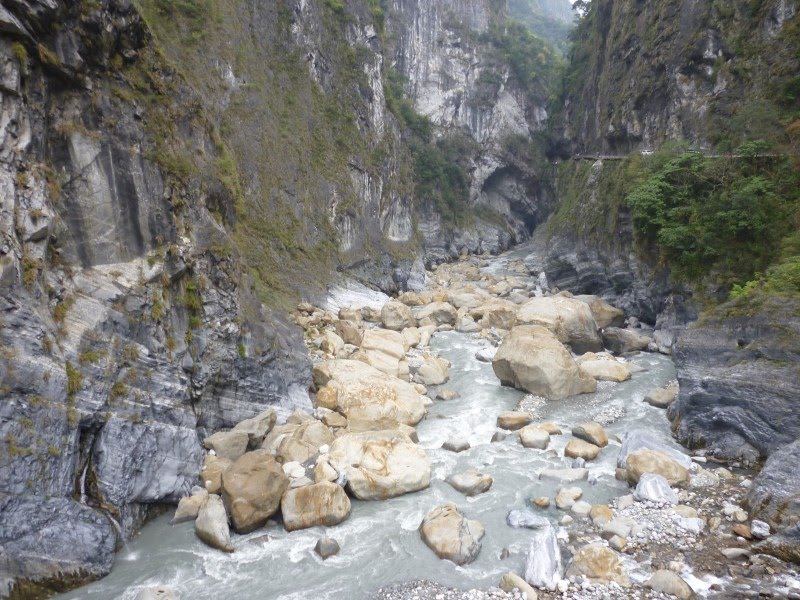