This weekend I had a bit of an adventure. My friend wanted to try making an igloo using igloo-making tools he had obtained, so we drove down to Mount Ruapehu early Saturday morning (four hours) and caught a shuttle up to the bottom of the Whakapapa ski area, then hiked through the snow for a couple of hours to reach his preferred site near the NZ Alpine Club's Ruapehu Hut, near Knoll Ridge, at an altitude of around 2040m. It's a wonderful spot, completely exposed on a rock ridge with great views of the surrounding area.

For various reasons, including congestion further down the mountain and a visit to the Knoll Ridge Cafe about 20 minutes walk from our site, we didn't start working on the igloo until about 4:30pm. A couple of hours of hard work later, we had completed at most one-third of the igloo and it was dark, getting colder, and I, for one, was exhausted. So we decided to abandon completing our igloo and just sleep out in the open in our bivvy bags, inside the ring we'd built. (A bivvy bag is a kind of tiny tent that's waterproof and insulating, just big enough to sleep in.) We boiled some water, had some hot drinks and rehydrated food, and went to bed around 8pm.

During the night light rain fell for a while, and later of course it got really cold. I was wearing a lot of clothing inside my sleeping bag and I still wasn't quite comfortably warm, and it was hard to find a comfortable sleeping position, and the bivvy bag was (by design, I think) quite stuffy, making breathing a bit more laboured than I'm used to. I did not sleep very well. The wind stayed light, which helped, but whatever transpired we would never have been in any actual danger, since the Alpine Club's hut was only about 30 metres away and the occupants would presumably have let us in if we'd begged them to save our lives.

Due to the rain and freezing temperatures overnight, when we got up around 7am our bivvy bags and the gear not inside them were all covered in ice. It took me a while to just open the zipper on my bag because of the ice — I pondered how embarrassing it would be to be trapped inside my bag! Then I realized that although I had taken into my bivvy bag everything I thought needed to be kept dry, I hadn't thought through the consequences of my other gear freezing. For example my waterproof-but-frozen camera stopped working (but fortunately after I thawed and recharged the battery, it works again). Frozen and ice-encrusted bags, shoelaces, straps, and zippers are no fun to manipulate with numb fingers!

This was my first time using crampons and an ice-axe. I didn't have much trouble but the conditions were not very difficult. Just as in non-icy conditions, I'm tentative going down steep slopes but hopefully I can get better at that. If I go hiking in the snow again I would definitely plan to sleep in a hut or a tent, or in an emergency a bivvy bag, not in a snow cave or igloo that require a lot of work to construct after reaching one's destination. 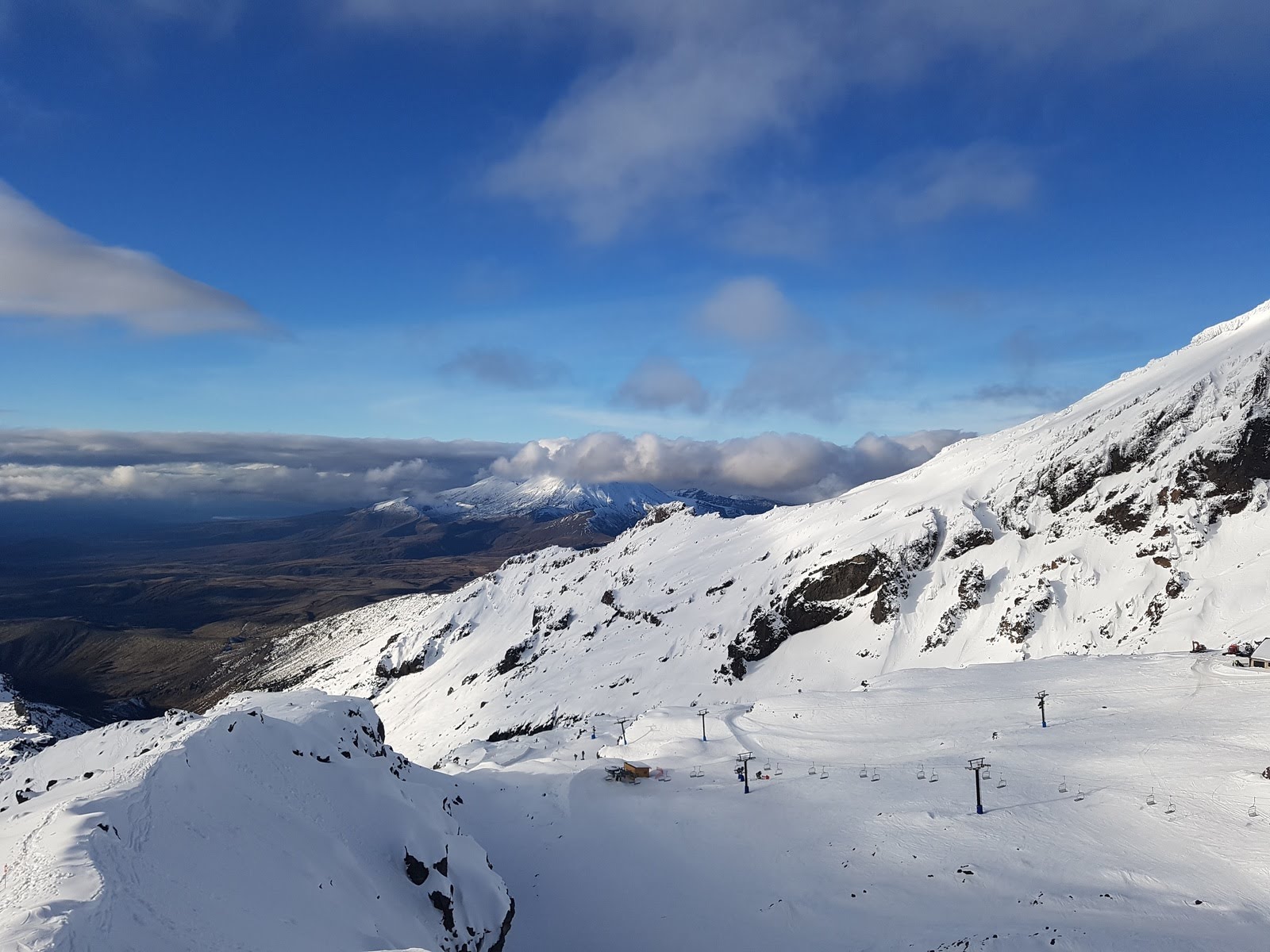 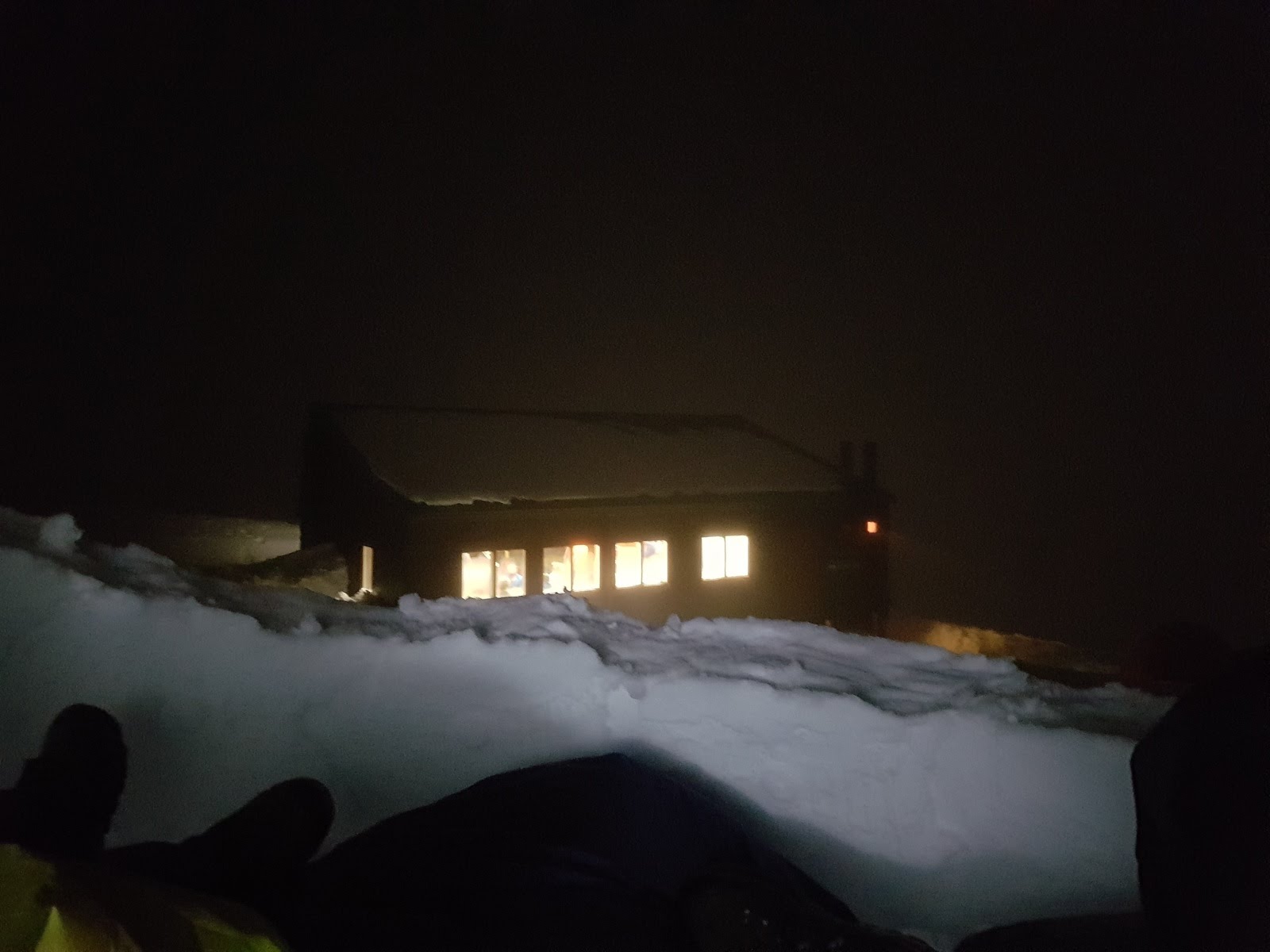 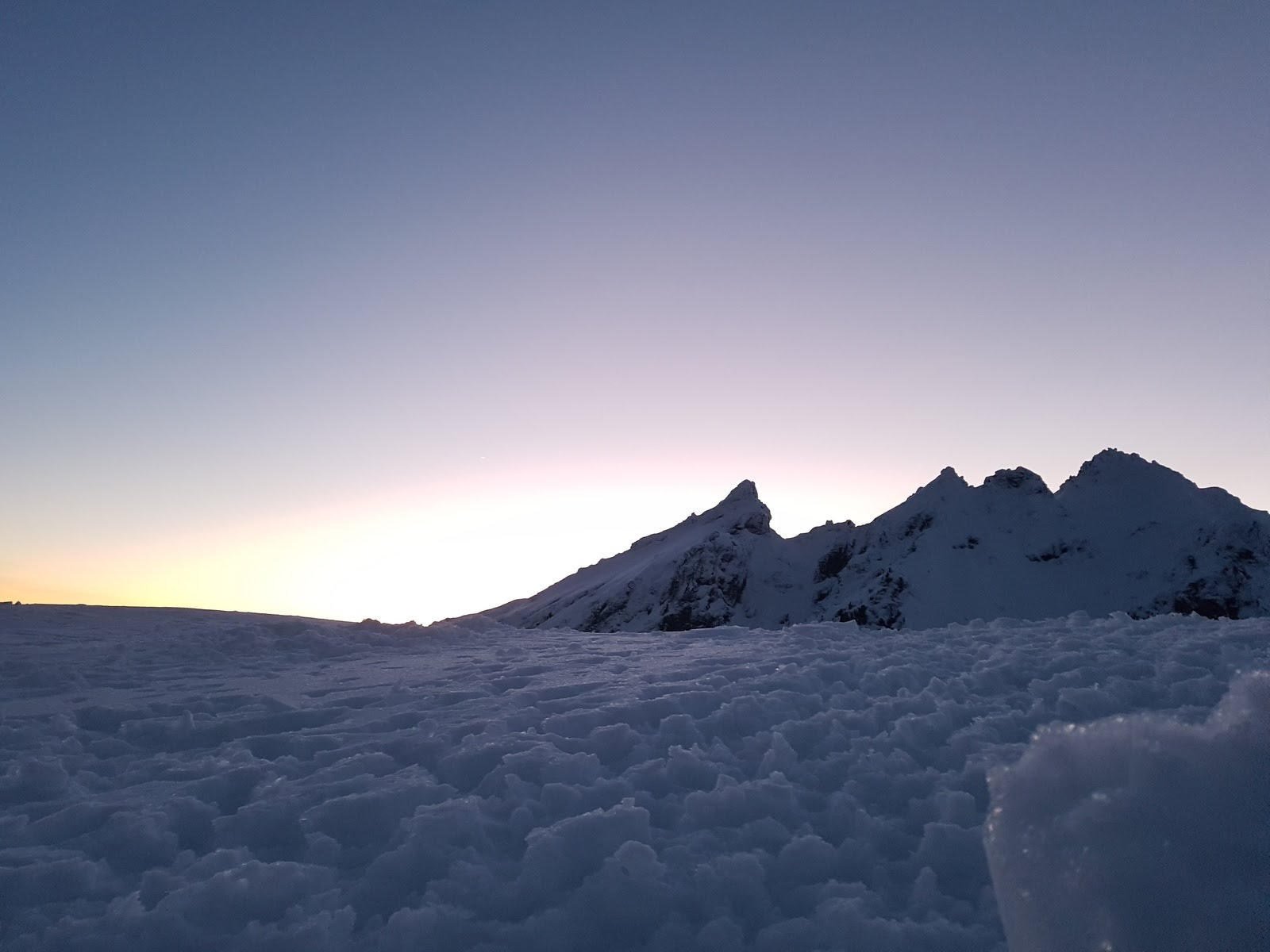 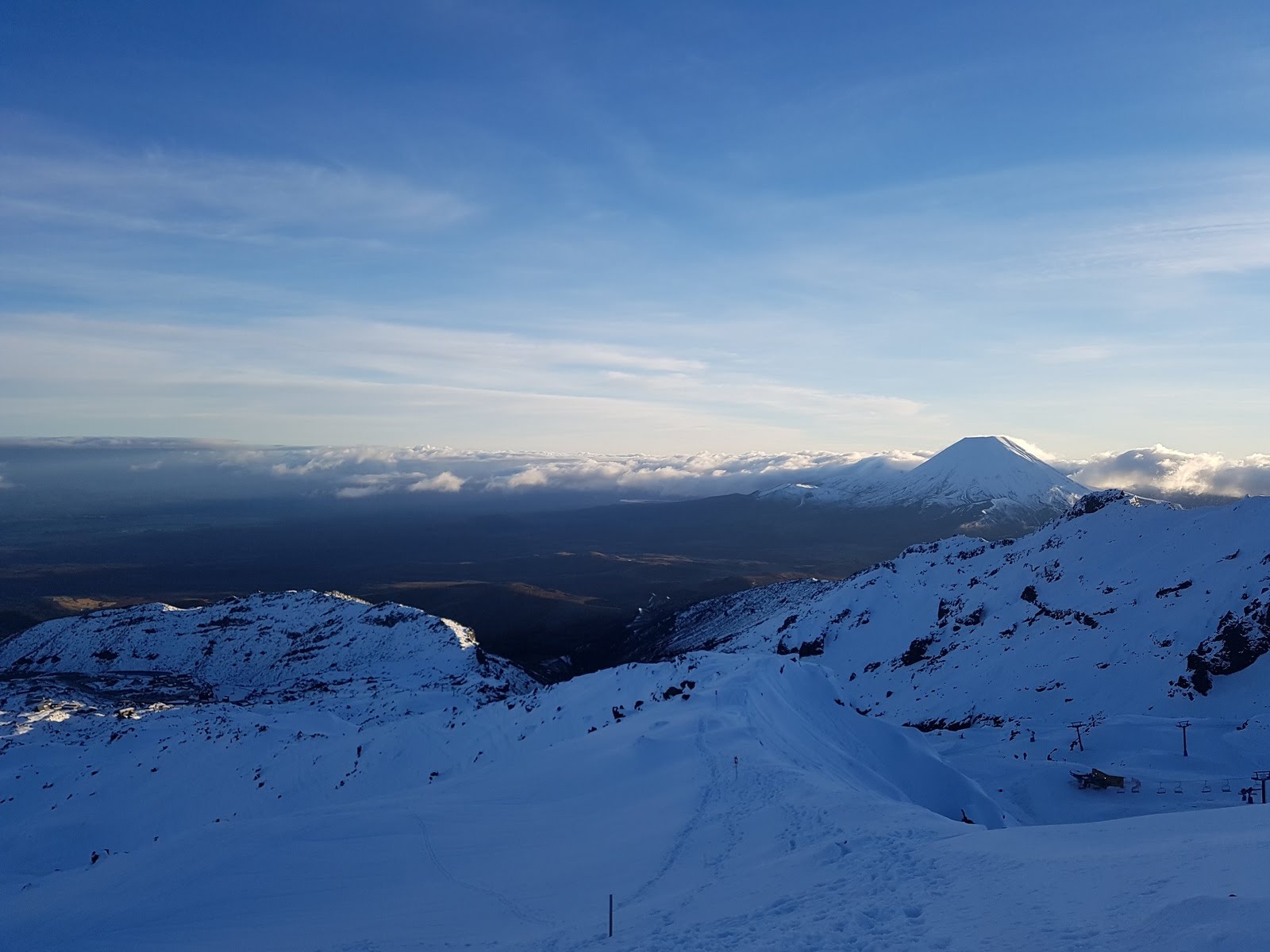 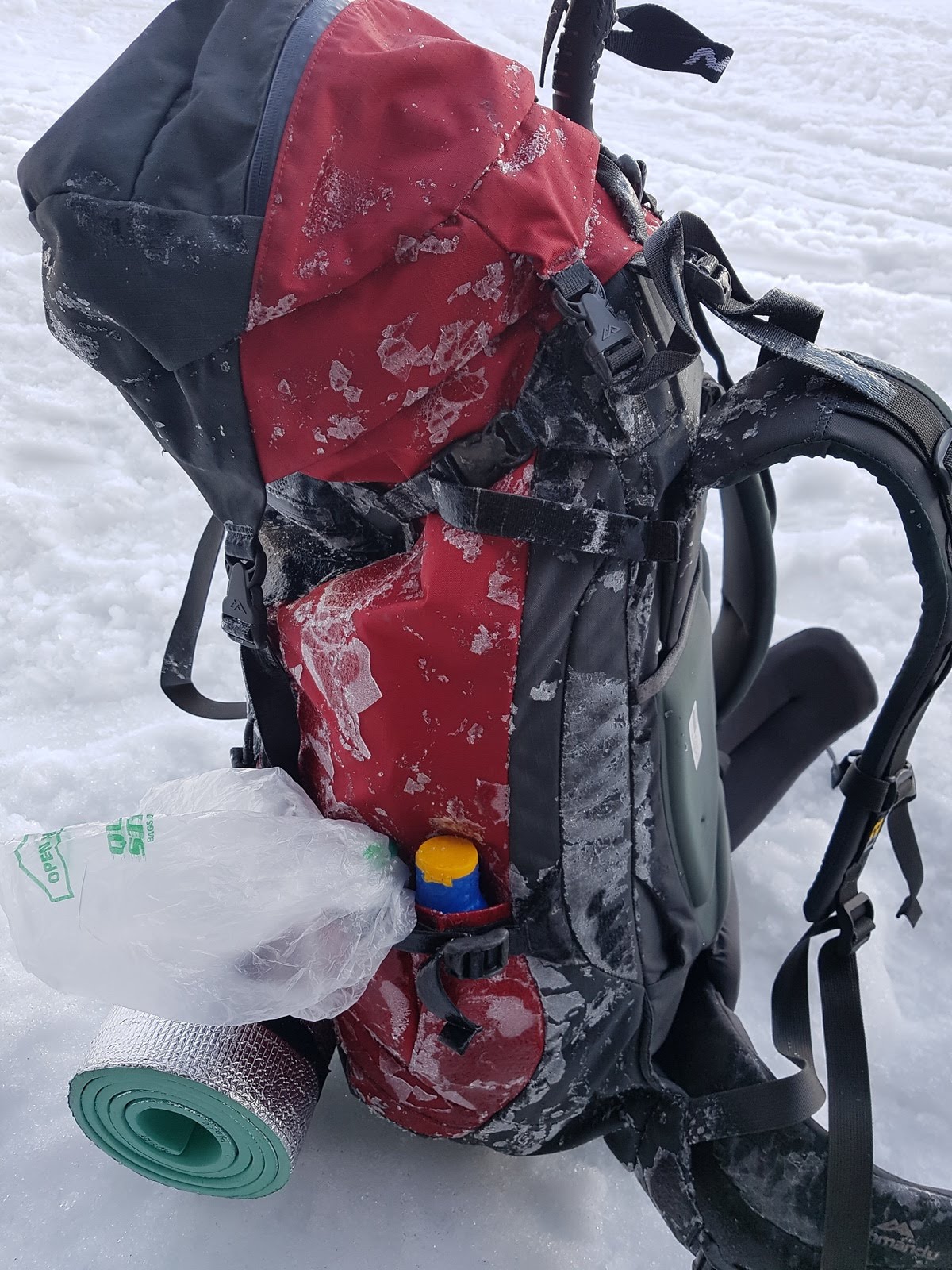 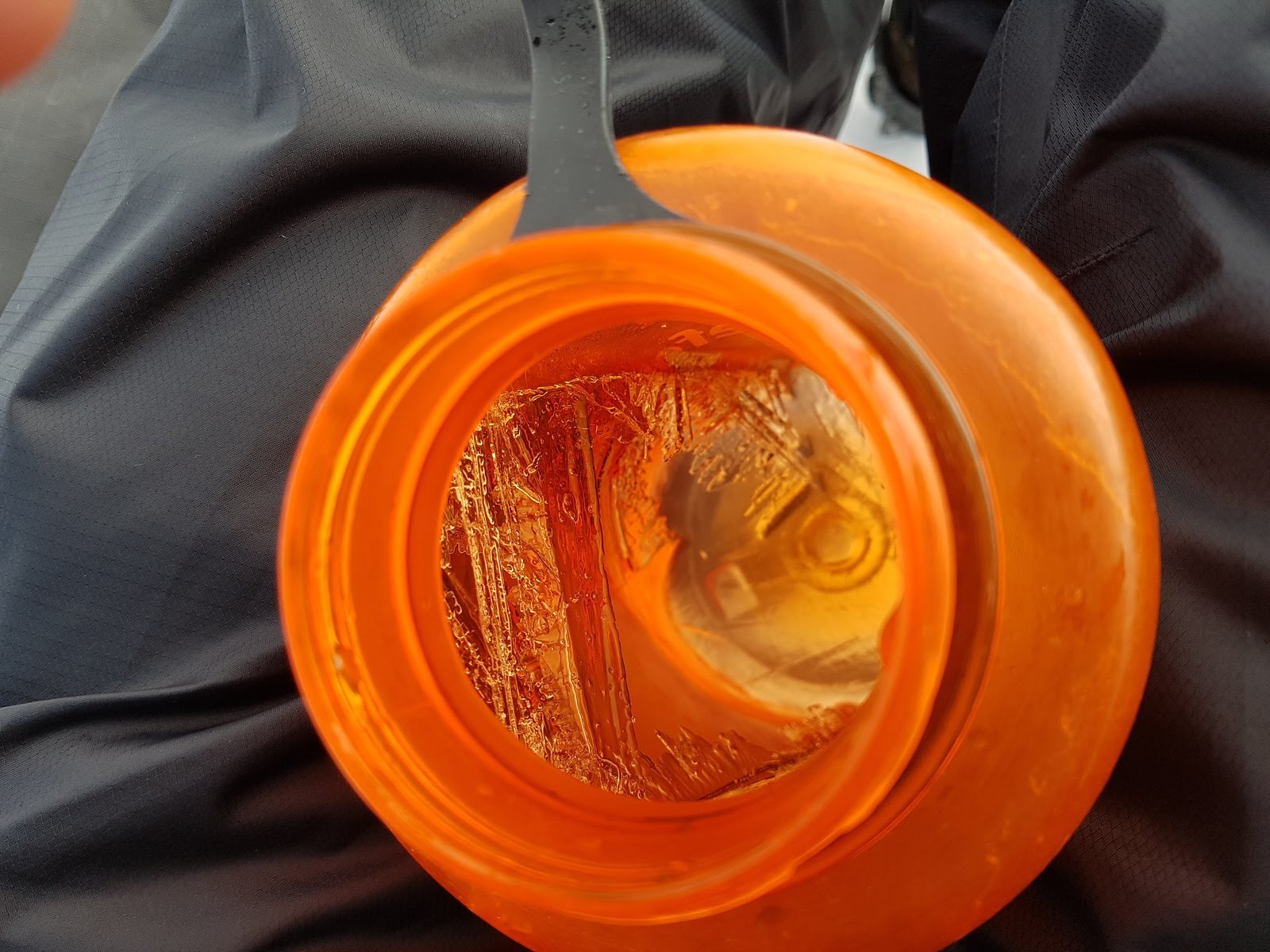