New Zealand's Tongariro National Park is one of my favourite places. We had a three-day weekend so I drove three friends and family down for a two-night stay at Waihohonu Hut, surely the grandest public hut in New Zealand, and we enjoyed the park in a wintry setting ... an interesting change from our previous visits.

We left Auckland around 7am on Saturday to avoid traffic — often hordes of people leave Auckland for long weekends — but there was no congestion. After stopping for lunch in Turangi we reached the trailhead on the Desert Road shortly before 1pm. The wind was cold and there was thick low-lying cloud, but it wasn't snowing ... yet. From there the walk to Waihohonu Hut is easy in less than two hours, on a good quality track with a very gentle upward slope. Much of the route is very exposed but the wind wasn't as high as forecast and we were well equipped. Towards the end it started snowing gently, but that was fun and we got to the hut in high spirits before 3pm. The hut is well insulated and other trampers had arrived before us and got the fire going, and the LED lighting was on, so it was cosy. We talked to them, made popcorn, watched the snow fall, played some card games and enjoyed the rest of the afternoon and evening as more trampers trickled in.

I had wondered how full the hut would get. There are 28 bunks, but it's off-season so they can't be booked, and given the public holiday potentially a lot of people could have turned up. As it happened about 35 people ended up there on Saturday night — many people tramping in from the Desert Road just to visit Waihohonu, like us, but also quite a few doing round trips from Whakapapa or even doing the Tongariro Northern Circuit (which requires alpine skills at this time of year). People grabbed bunks as they arrived, and the rest slept on spare mattresses in the common room, which was actually a fine option. The only problem with sleeping in the common room is people staying up late and (probably other) people coming in early for breakfast. Even though it was technically overfull, Waihohonu Hut's common areas are so spacious that at no time did it ever feel crowded.

On Sunday morning there was a bit more snow on the ground, some low cloud and light snow falling. I was hoping to walk west from the hut to the Tama Saddle, which separates Mt Ruapehu to the south from Mts Tongariro and Ngauruhoe to the north, and visit the Lower Tama Lake just north of the saddle. It was unclear what conditions were going to be like but the forecast had predicted snow would stop falling in the morning, and we were well equipped, so we decided to give it a go. The expected walking time was about six and a half hours and we left before 9am so we had plenty of time. In the end it worked out very well. The cloud lifted quickly, except for some tufts around Ruapehu, and the snow did stop falling, so we had stunning views of the mountains the whole day. We were the first walkers heading west that day so we walked through fresh snow, broke the ice of frozen puddles and streams, and saw the footprints of rabbits and other animals, and relished the pristine wintry environment. It's the first time I've done a long-ish walk in the snow in the wilderness like this, and it was magnificent! I'm so grateful we had the chance to be there and that the weather turned out well.

As we got close to the saddle the snow was thicker, up to our knees in a few places, and the wind got stronger, and at the Lower Tama Lake it was quite cold indeed and blowing steadily from the east. I was a bit worried about having to walk back into that wind, and there was still the possibility of a change in the weather, so even though we were ahead of schedule I decided after lunch above the lake we should head back to Waihohonu rather than carrying on up to Upper Tama Lake (where no doubt the views would have been even better, but the wind would have been even colder!). Interestingly though, we were far from alone; many people, mostly foreign tourists, had walked to the lakes from Whakapapa (on the western side of Ruapehu), a shorter walk, and even headed up the ridge to the upper lake. As it turned out, our walk back was pretty easy. The wind mostly died away and the sun even came out.

We got back to Waihohonu about 3:30pm and once again relaxed at the hut for the rest of the afternoon, catching up with the trampers who were staying both nights and meeting new arrivals. That night the hut was again overfull but only by a couple of people, and again that wasn't a problem.

This morning (Monday) the sky was completely clear, giving magnificent views of snow-covered Ngauruhoe and Ruapehu through the hut's huge picture windows. A thick frost on the ground combined with the snow to form a delightfully crunchy surface for our walk back to the car park. I for one kept turning around to take in the incredible views. It was a very pleasant drive back in the sun through the heart of the North Island, but I can't want to go tramping again! 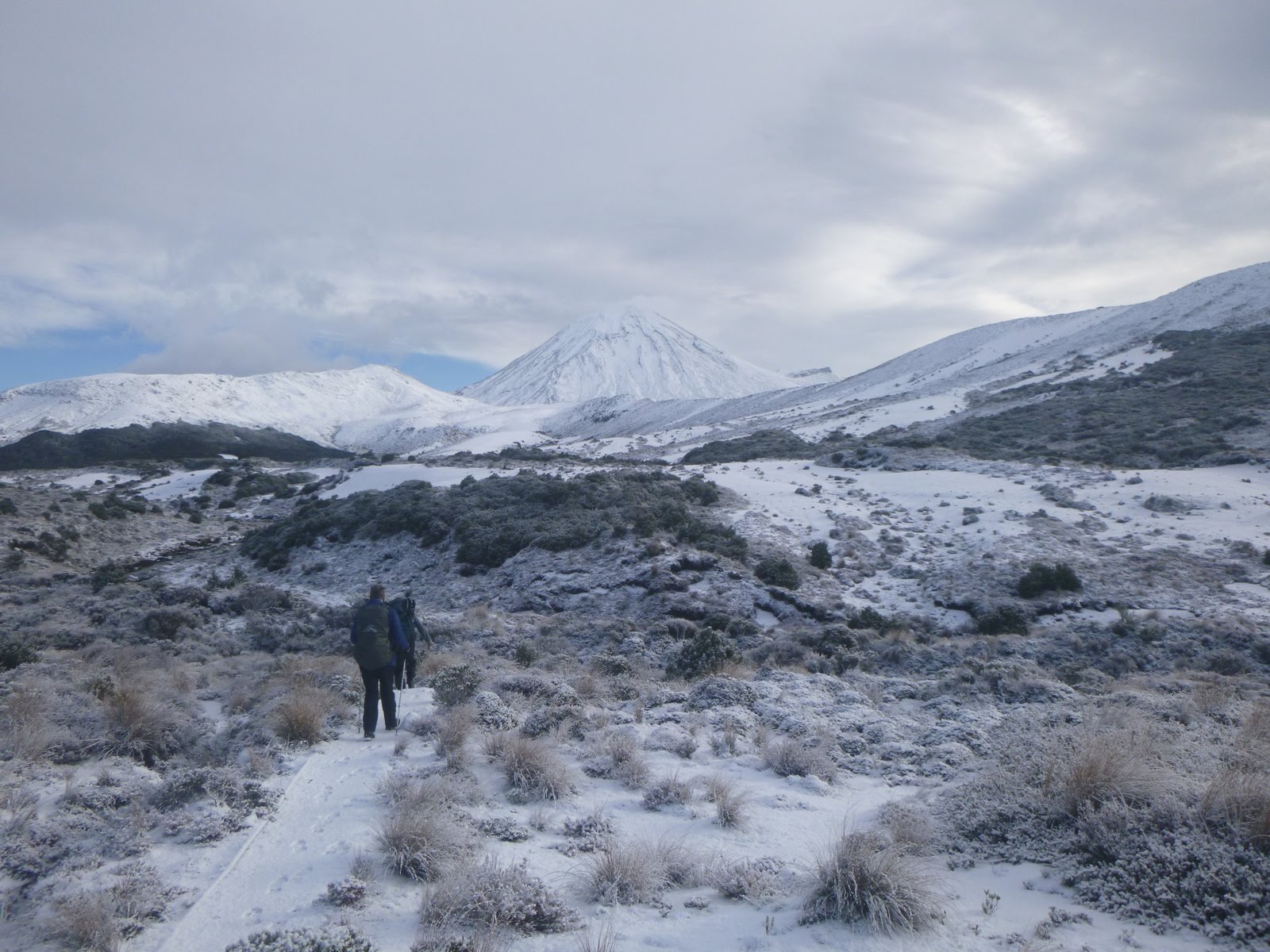 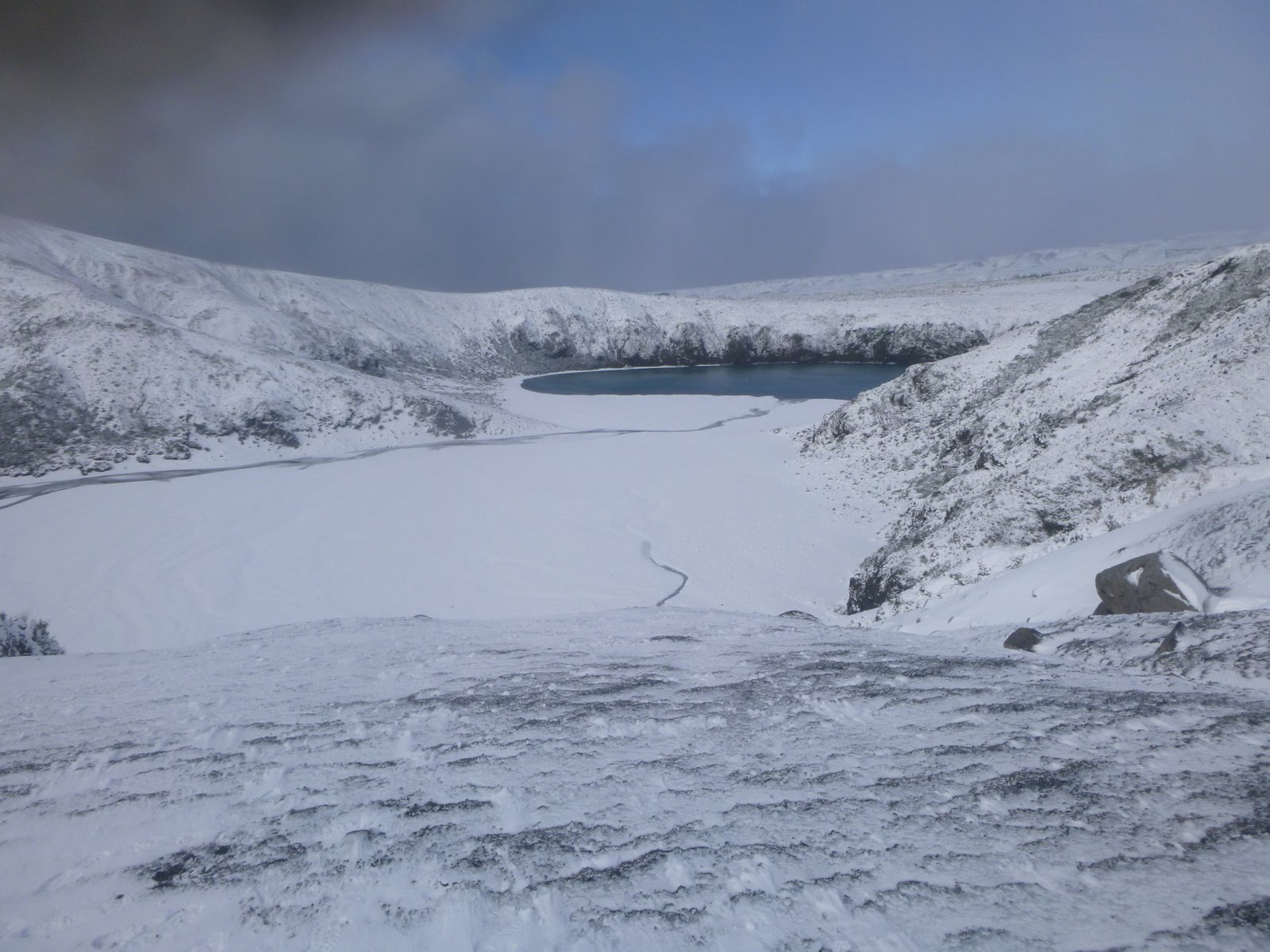 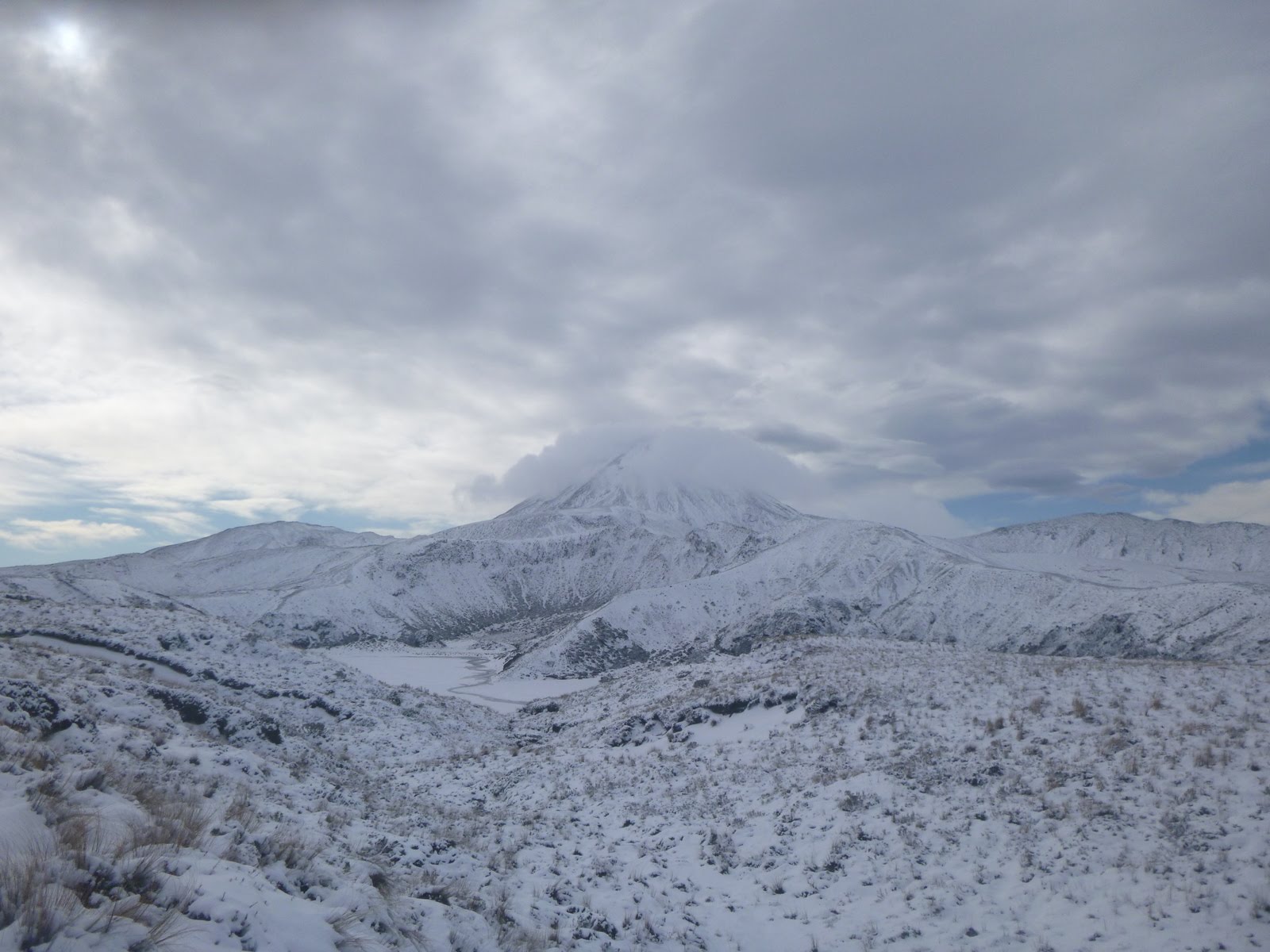 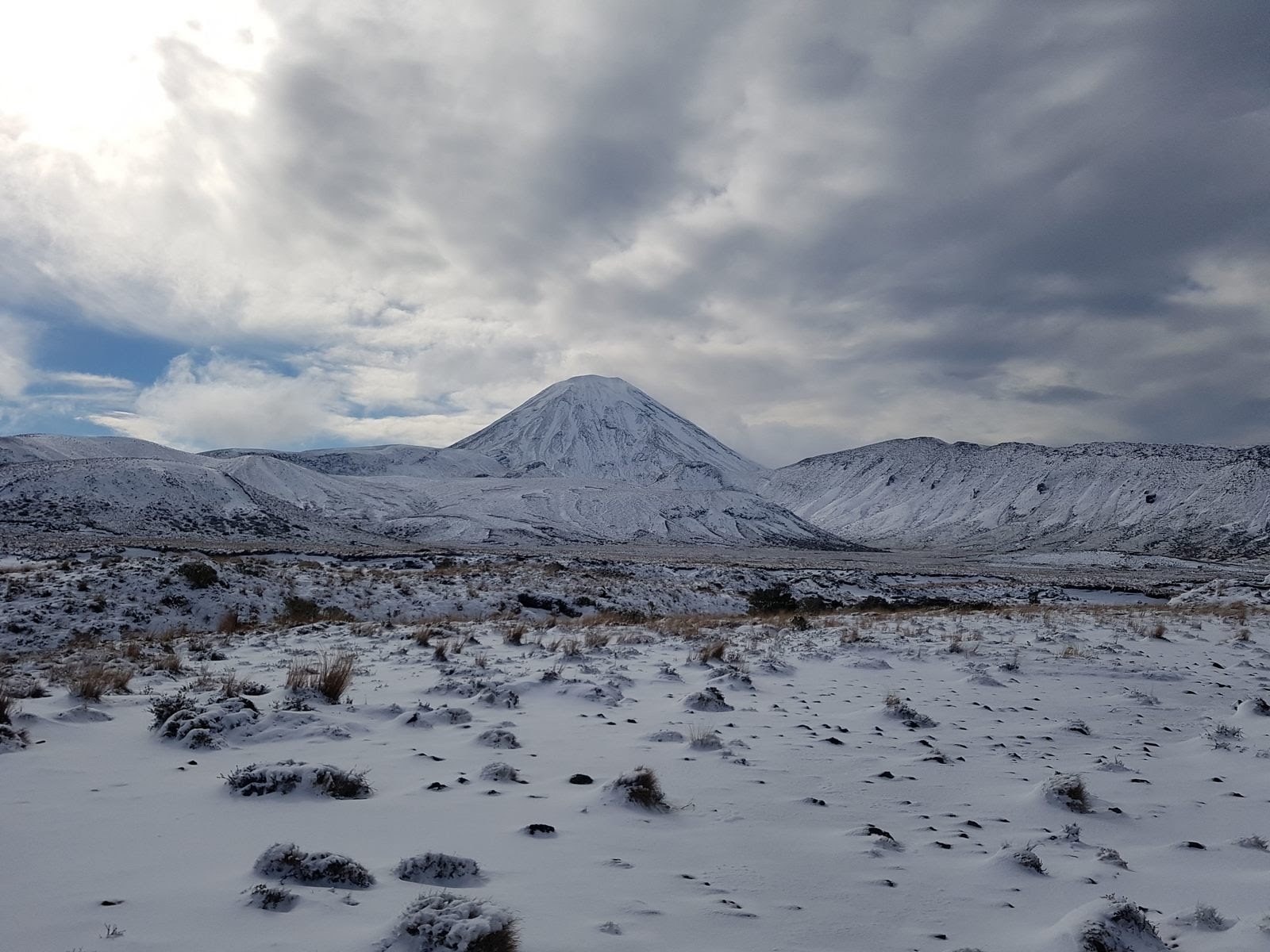 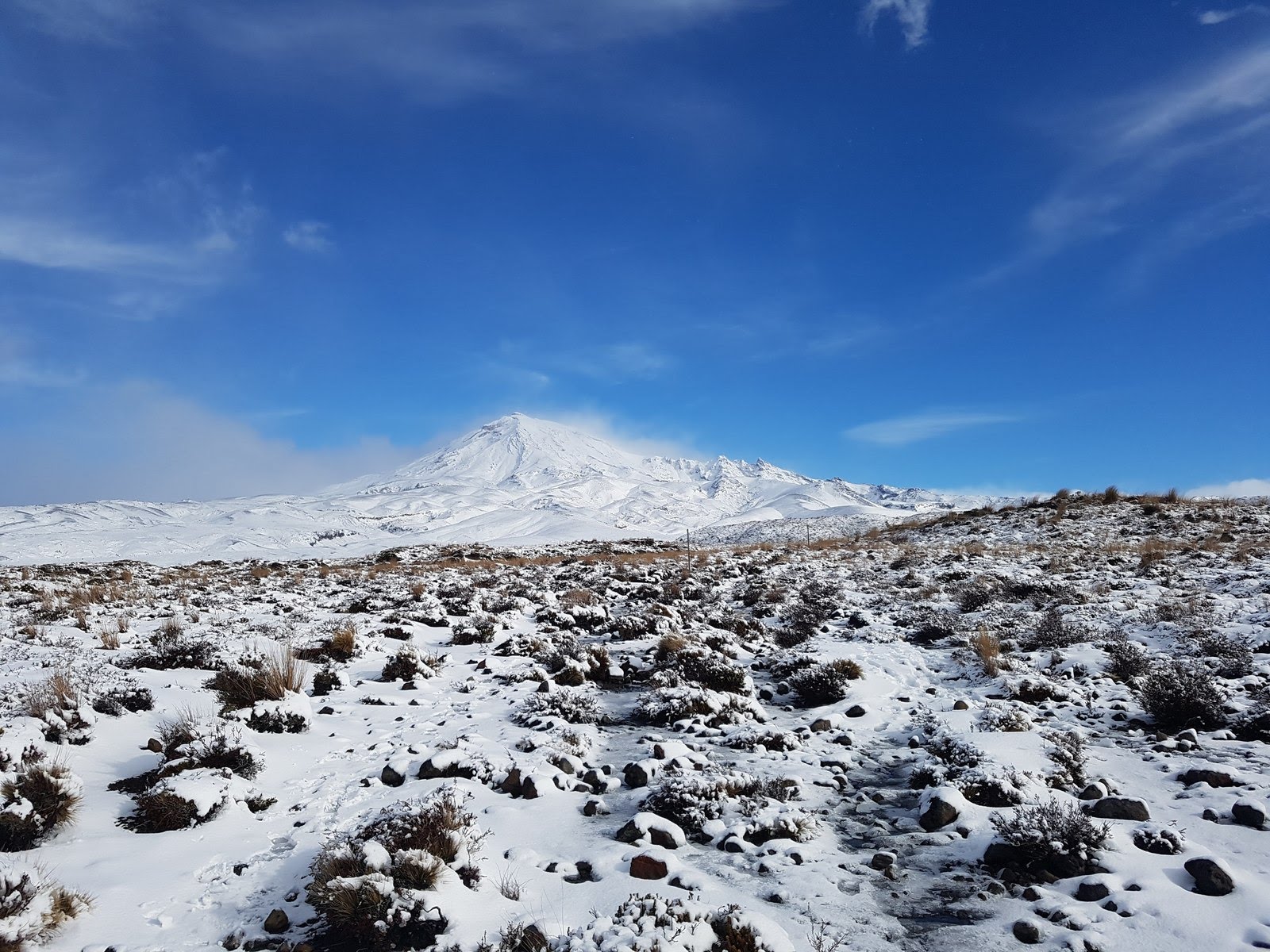 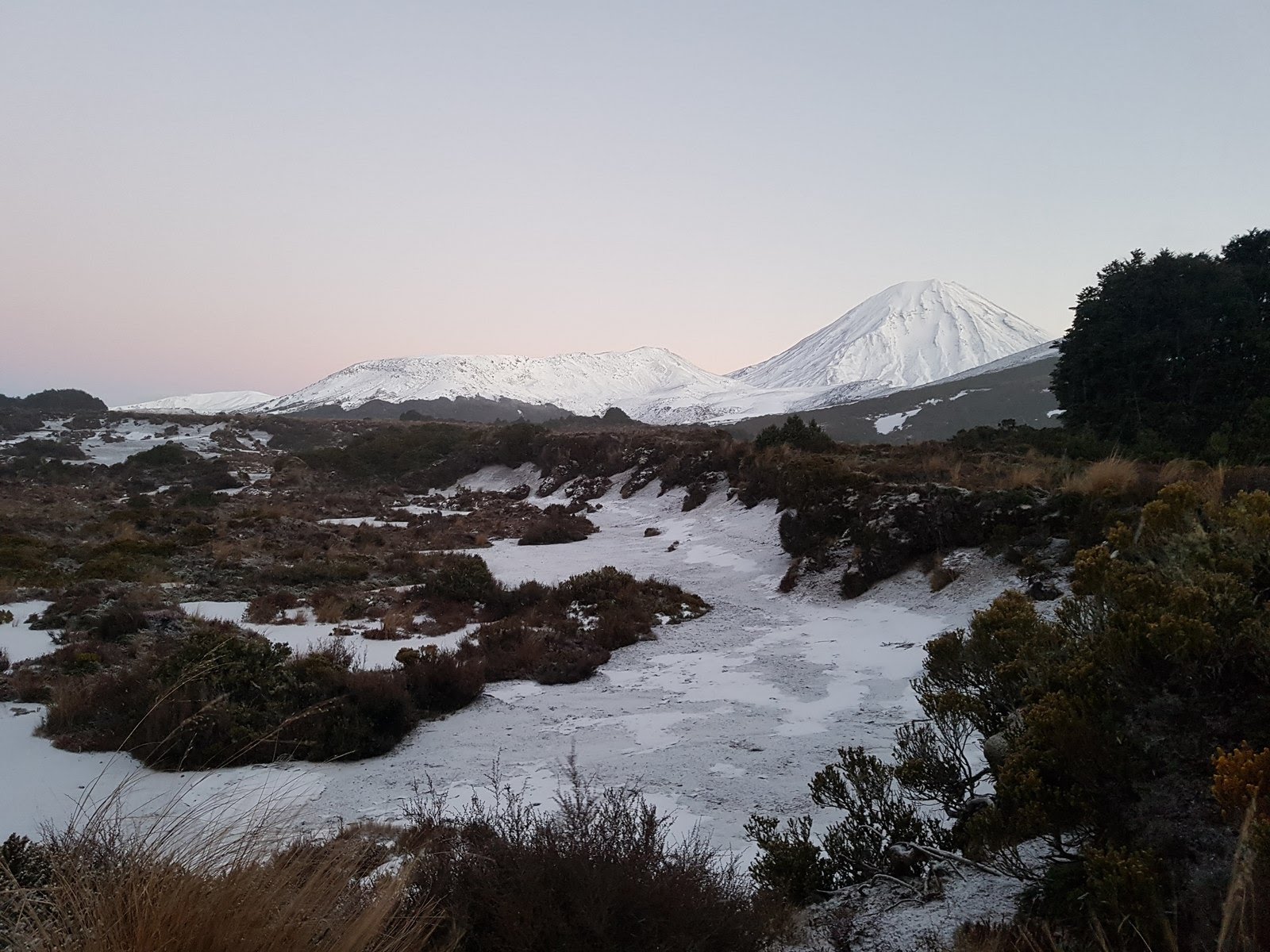 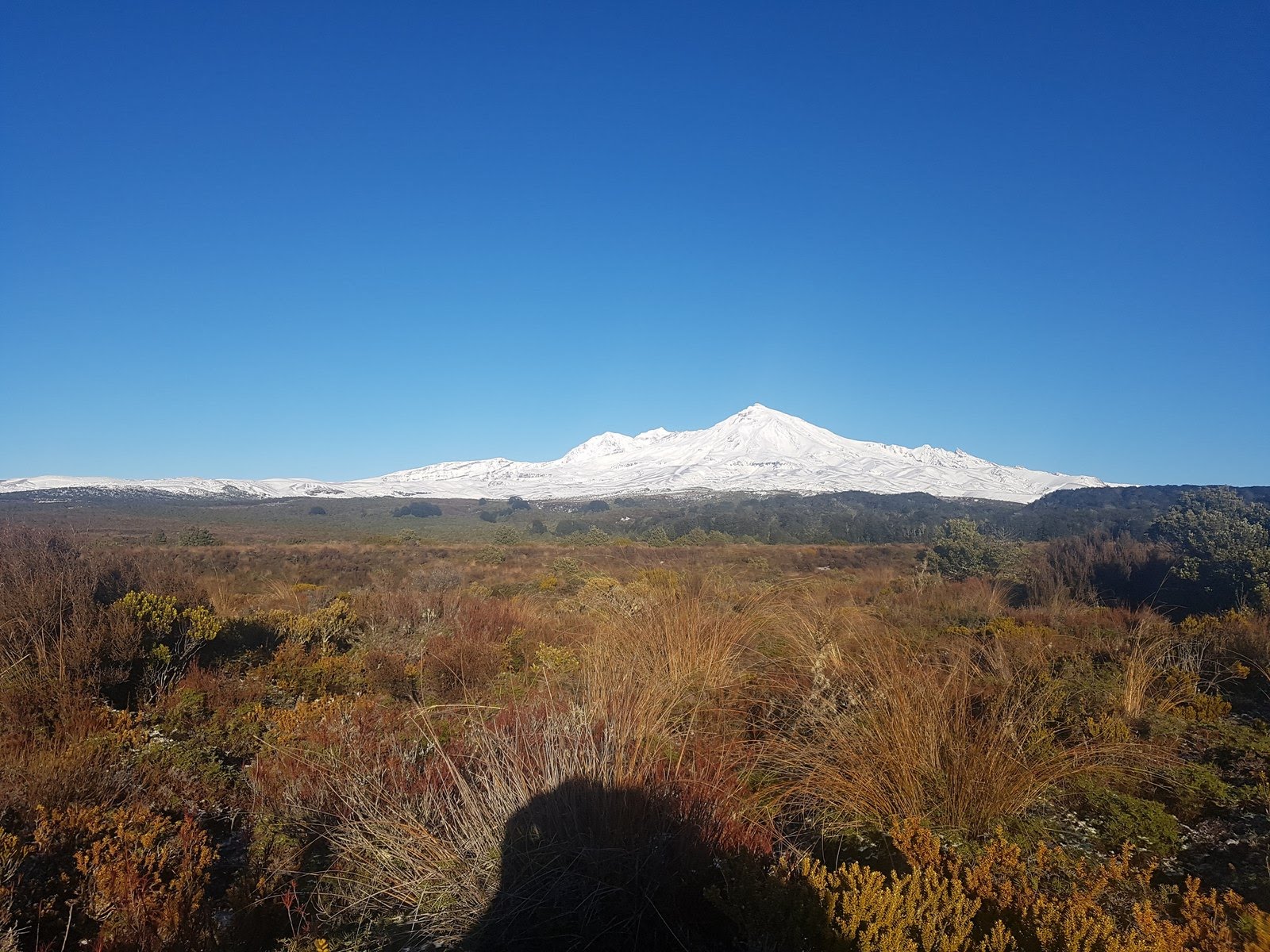