Yesterday I got back from a walk on the Tongariro Northern Circuit. Unfortunately things didn't go quite according to plan!

We had intended to walk the circuit over three days, clockwise. On Monday we would walk from Mangatepopo over Mt Tongariro, via the Tongariro Crossing, to Emerald Lakes, where we would turn off and carry on down to Oturere Hut. On Tuesday we'd walk south to Waihohonu Hut, and on Wednesday walk west to Whakapapa to complete most of the circuit. However on Monday high winds were forecast at the top of Tongariro so the Department of Conservation issued a "bad weather" forecast, so the shuttle we had booked would not take us to Mangatepopo, so we couldn't walk from there even if we thought it was safe, which we did not. We talked to staff at the DoC visitor's centre in Whakapapa and eventually decided to walk from Whakapapa east across the Tama Saddle to Waihohonu Hut and then north to Oturere — i.e. do half the circuit anticlockwise from Whakapapa in our first day. On Tuesday we walked south to Waihohonu as planned. On Wednesday we walked out to the Desert Rd and caught a shuttle back to Whakapapa instead of walking back to Whakapapa as planned, because the weather forecast was still poor and there didn't seem much point in re-traversing the saddle into wind and rain.

I thought the first day might be a bit gruelling — about eight hours of walking, on paper, with significant wind and rain forecast. It actually turned out pretty well. Only a little rain fell on us — we seemed to be moving east just ahead of it — and the wind was mostly at our backs. The sun even broke out a few times. No-one complained about the length of the walk and I felt pretty good myself. We reached Oturere Hut after about eight hours but that included our lunch break, a lengthy stop at Waihohonu Hut for a rest and hot drinks, and a side trip to Lower Tama Lake, so we were actually quite fast. One upside of the weather was that Oturere Hut, which is rather small, would have been packed with twenty-six people in good weather but only our group of ten and two other women actually showed up, so it was very comfortable.

On Tuesday the weather was similar — westerly wind and rain — but some of us wanted to do a "side trip" up Oturere Valley to Emerald Lakes if possible, before moving on to Waihohonu Hut — an hour and a half each way. Six of us (out of ten) did it, but it was a bit brutal! It wasn't too bad in the valley — wind and some drizzle in our faces, the spectacular volcanic desert landscape obscured by drifting fog — but the track then climbs steeply up to the saddle with the lakes, and there it was colder and the wind was much stronger. Scrambling up the last, steep part of the path into strong winds and driving rain was no fun at all! (The strong smell of sulphurous gases from the volcano added an extra frisson!) We had a quick look around the lake and the Tongariro Crossing junction and then scrambled right back down again. The walk back down the valley with the wind at our backs was positively pleasant. One good thing about this side trip is that it confirmed we had made the right choice in not risking crossing Tongariro on Monday!

We were able to have lunch in the cosy Oturere Hut and then it was just an easy two and a half hour walk to Waihohonu. Actually it was only mostly easy; in a few especially exposed places we got some very big wind gusts, probably the windiest conditions I've ever walked in. I had to lean hard into the wind to not be blown over, and some in our group just had to squat down and wait for the gusts to pass. I guess it was probably blowing a hundred kilometres an hour.

Once again we had the hut mostly to ourselves — and I think Waihohonu is still the best hut in New Zealand! The two women from Oturere stayed there, and there was also a French woman who was in NZ to work for a few years (arriving eighteen months ago — that was good timing). We had great afternoon and evening — a fire, games, good food and fellowship — and then on Wednesday morning, an early start and a short seventy-five minute walk to the car park to get picked up and returned to Whakapapa.

The weather was certainly disappointing. Ruapehu and Ngauruhoe are beatiful mountains and were entirely covered by cloud the entire time we were there. Of course it was disappointing we couldn't cross Tongariro. On the other hand, I think most or even all people in our group of ten had a good time and have much to be thankful for. If you tramp regularly you have to accept that the weather won't always be good; if you enjoy yourself even in the bad weather, you've got the Right Stuff for tramping :-). 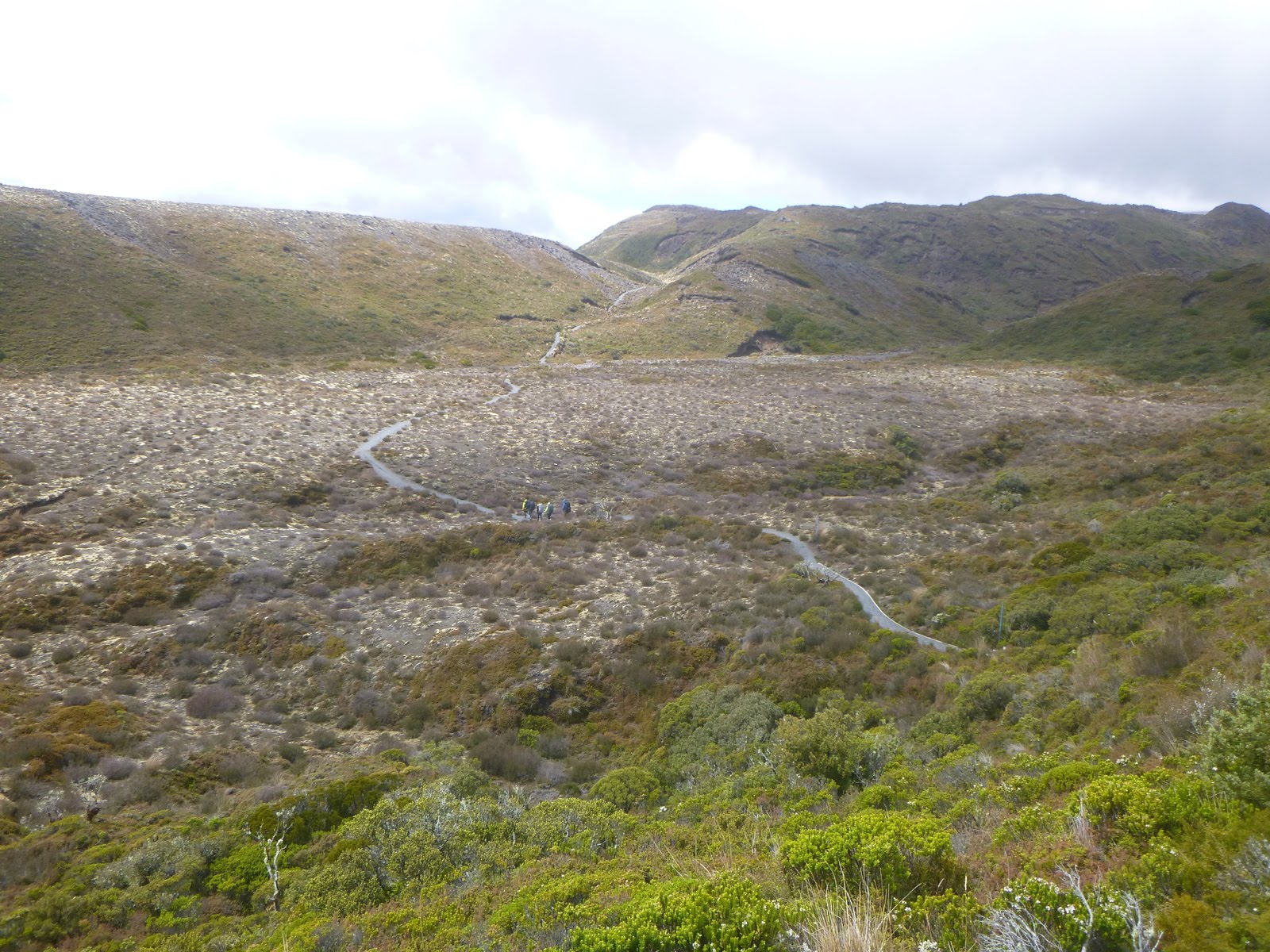 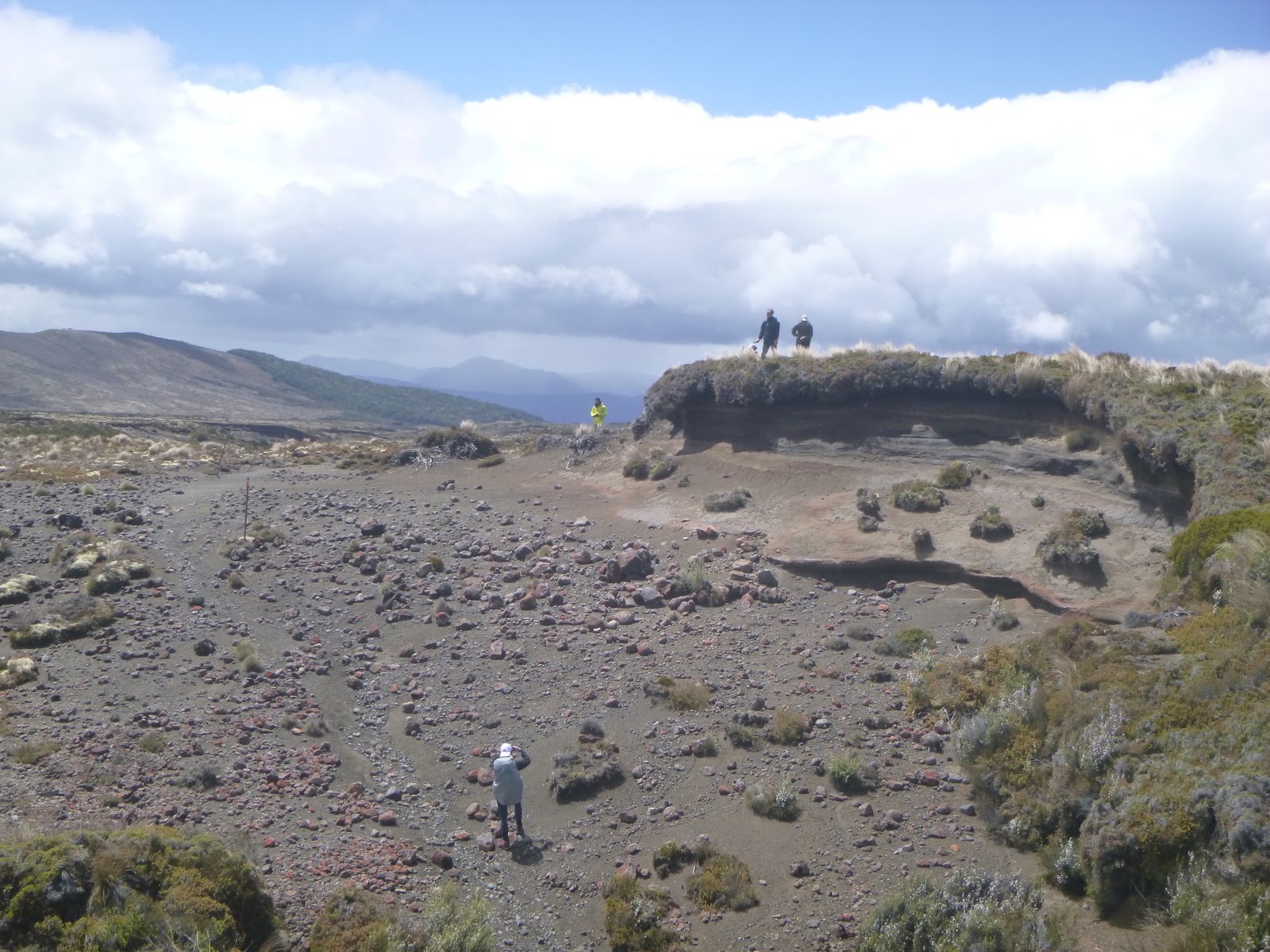 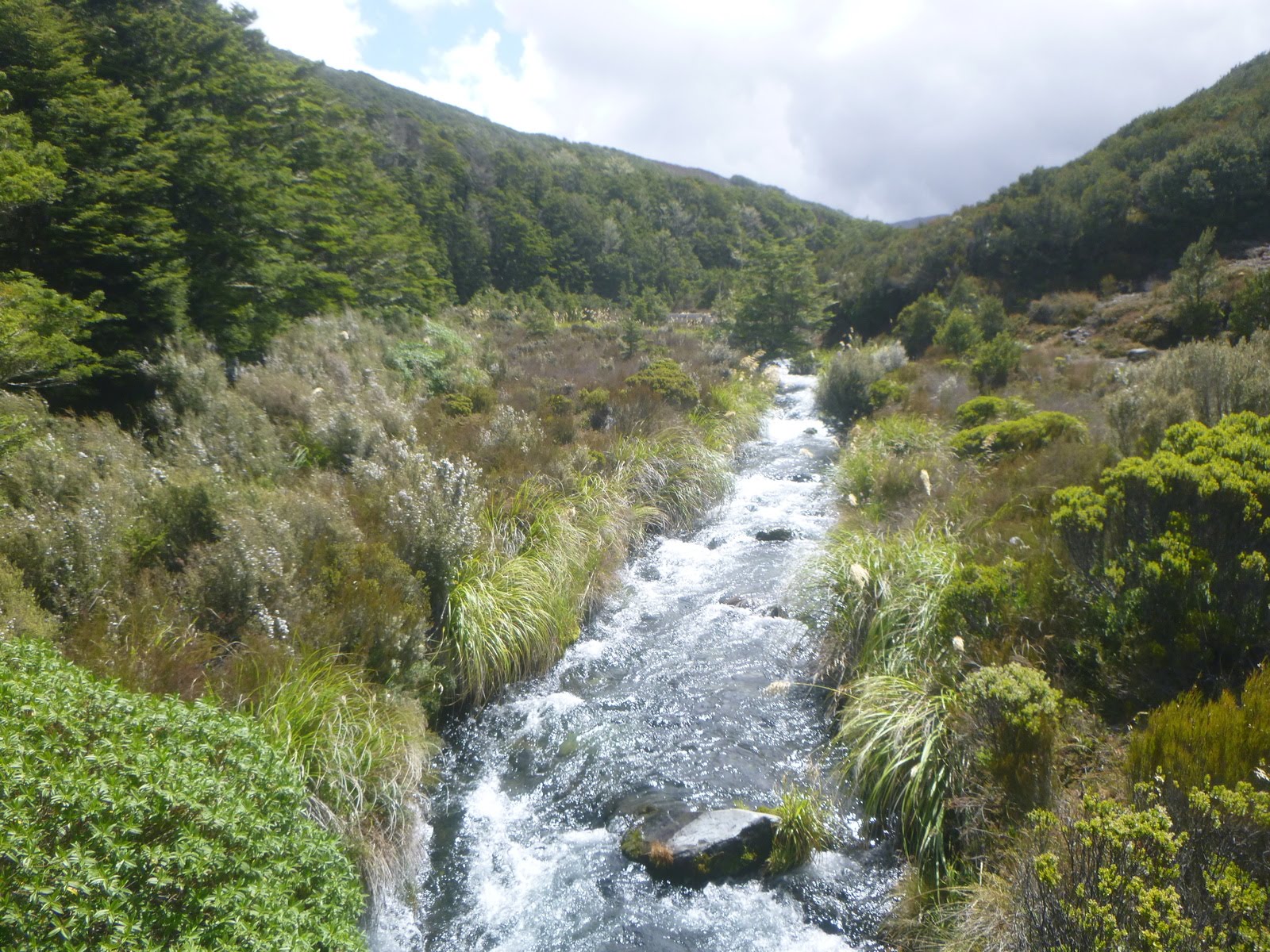 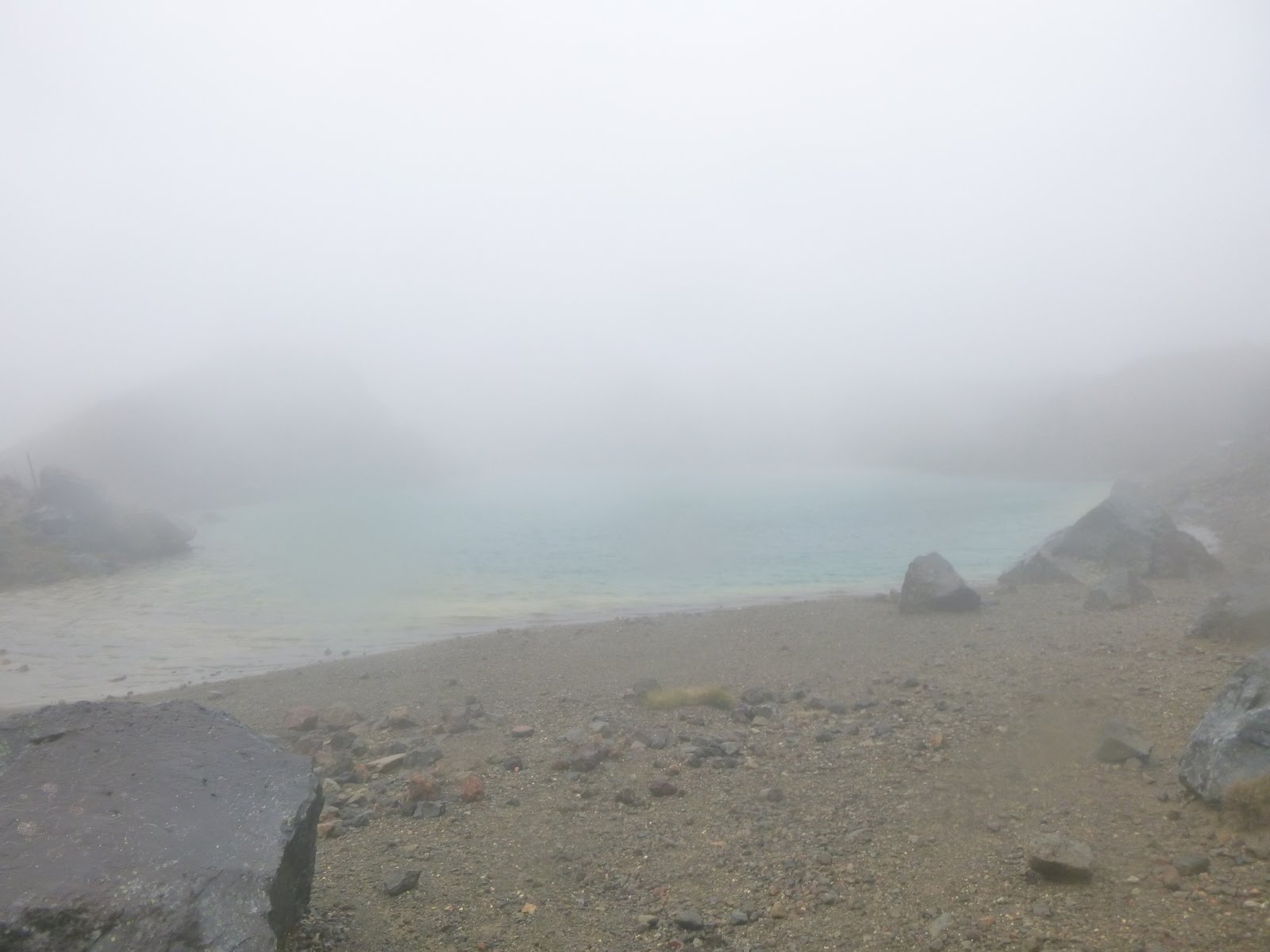 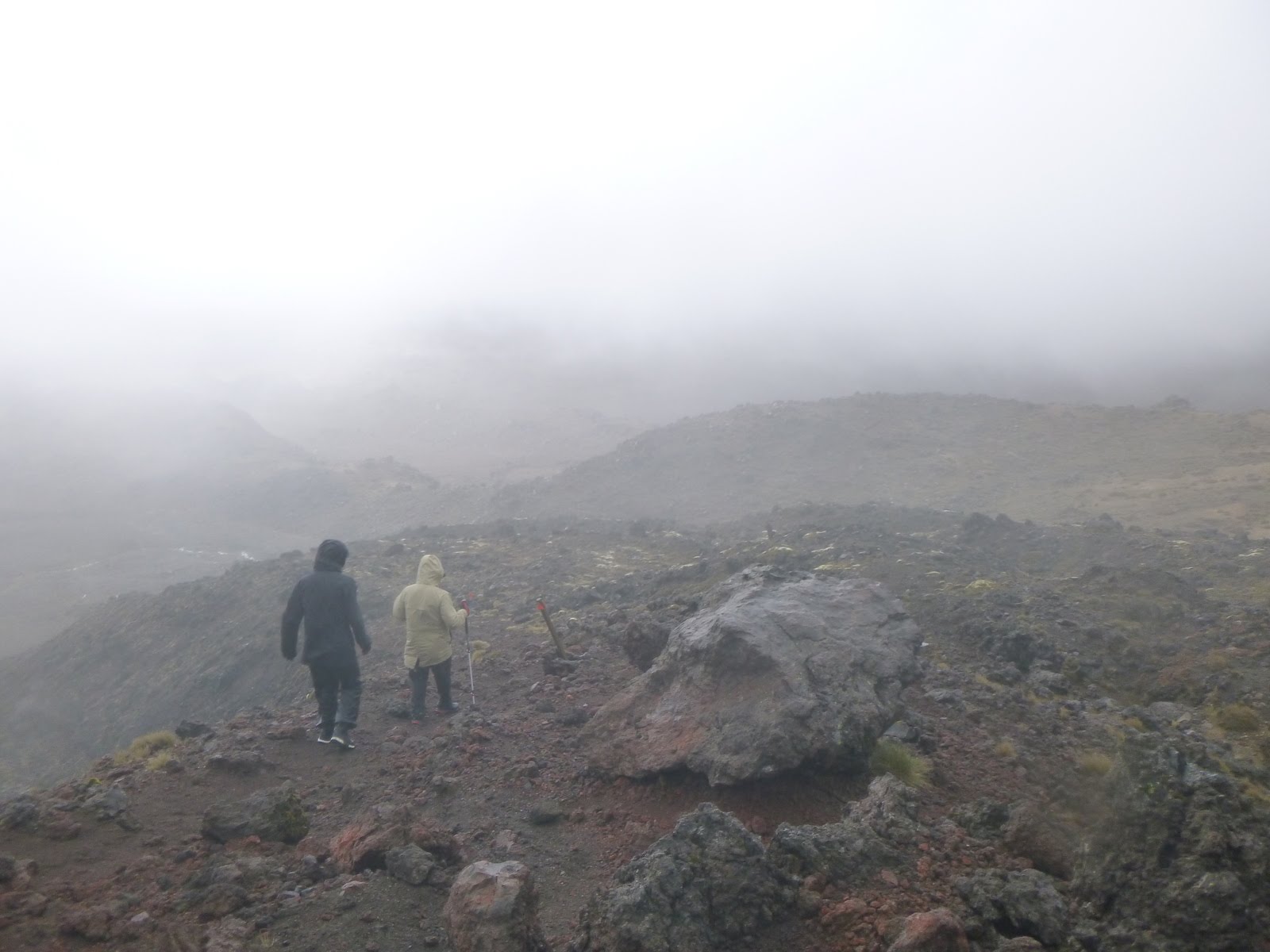 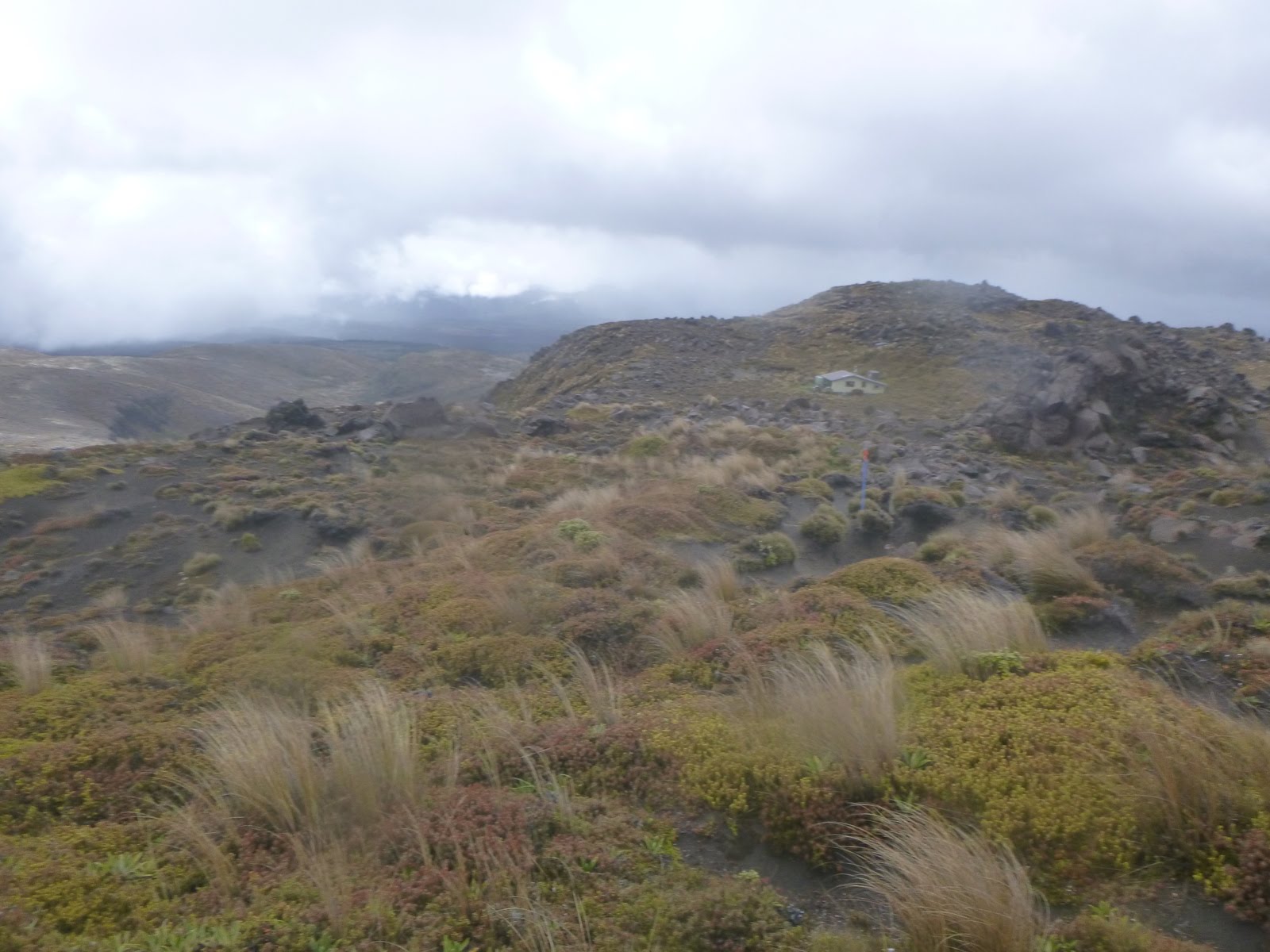 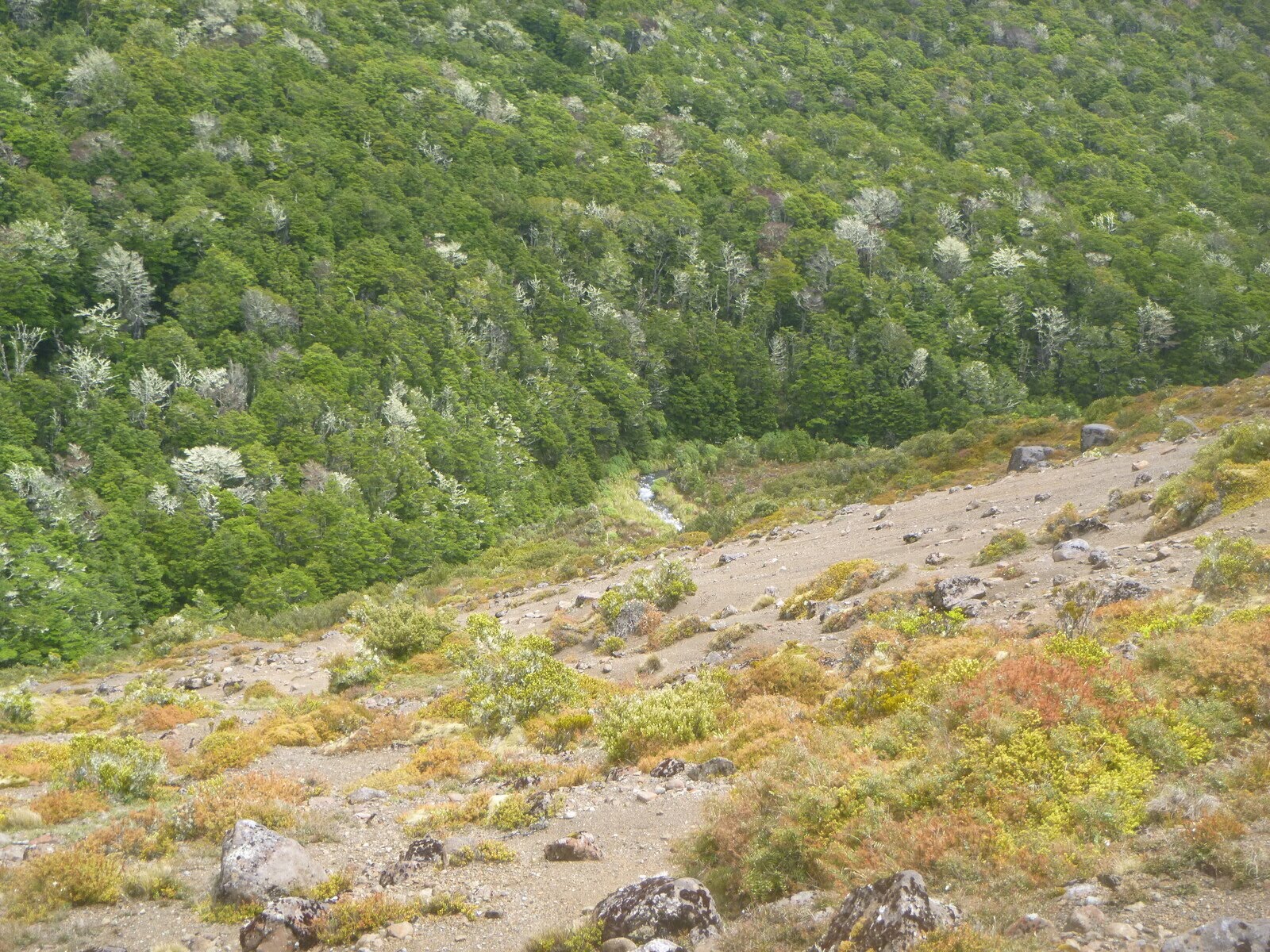